“Germany is a good country . . . I’ve heard they wash the streets with shampoo there.”

Rosa Achmetowna is determined to get her family (and herself—really, mostly herself) out of the Soviet Union, and a marriage between her daughter and a visiting German national seems like the perfect plan. But this is not the first marriage plot Rosa has orchestrated. Her daughter, whom she mercilessly refers to as “stupid Sulfia,” has had two previous husbands, in large part due to Rosa’s manipulation.

These kinds of machinations are the heart of Alina Bronsky’s novel The Hottest Dishes of the Tartar Cuisine, and Rosa’s unwavering determination extends to all of her endeavors, including an attempt to rid Sulfia of an unplanned pregnancy. When Sulfia arrives home at the communal apartment and announces that she is pregnant and must have conceived in a dream, Rosa tries everything she can think of to thwart the birth. But a little girl—Aminat—bests all of Rosa’s efforts, and when she proves to resemble Rosa more than Sulfia, she immediately becomes the center of her grandmother’s world. It is this obsession, this possessiveness of Aminat that drives Rosa’s actions and shapes her relationships throughout the story, from falsifying documents to suicide attempts to estrangement and eventual reconciliation.

Through it all, narcissistic, calculating, and ever-amusing Rosa is our window on the fate of her family. She is the epitome of an unreliable narrator, though her sociopathic nature is never veiled: she flaunts it, qualifies her faults as virtues, and is so ruthless and effective that occasionally it’s hard to disagree. This woman, at turns conniving, charming, and abhorrent, is a work of wonder. She is so much a stereotype as to be endearing, and for all her irreverence, even the least sympathetic reader would agree she is nothing if not remarkably efficient.

And it is the inimitable Rosa that makes The Hottest Dishes of the Tartar Cuisine by Alina Bronsky so special. She proudly bribes and intimidates her way through Soviet bureaucracy, multiple marriages for Sulfia, and an eventual move to Germany.

The ridiculous self-aggrandizing anecdotes and asides coupled with Rosa’s twisted rationale and self-righteous attitude make for a darkly comic read, but the story, despite the occasional absurdity of the situation or the telling, does not shy from darker or difficult themes. And for all the levity or disdain with which the narrator may address an issue, she is a capable psychologist, astute in her observation of human behavior if still stubbornly unaware of her own neuroses.

The absurdity of the narrator is matched only by the situations in which she repeatedly finds herself, frequently with comical results. Take, for example, the wooing of the aforementioned German: Rosa’s foreign target for husband number three claims to be writing a book on Tartar cuisine, and as an ethnic Tartar, Rosa pledges to share generations-old recipes and lure him into marriage through an appeal to his stomach and his research. Of course, in the U.S.S.R. it’s a time of limitations, so Rosa must improvise, trying to pass haphazard creations off as Tartar culinary legacy. Her confidence carries the day, sending the book and these three women into a new chapter. But this turning point is tainted by a sense that something is not quite right; the visiting German proves to be far more interested in something beyond Tartar dishes, something that Rosa in her wretchedness is willing to encourage.

Alina Bronsky is versatile, her prose taking the reader through family feuds, marital strife, gender inequality, and light political commentary with humor while still seriously weighing all issues considered, and this was undoubtedly a factor in its nomination for the 2010 German Book Prize. Though originally published in German, the quality of the English translation is exceptional, a lively second incarnation of a great story, and translator Tim Mohr deserves special recognition for hitting all the right notes. The Hottest Dishes of the Tartar Cuisine is entertaining to the last line, an elegant rendering of one family’s experience navigating the changing concepts of culture and duty, and the indomitable matron at the center of their orbit.

The Hottest Dishes of the Tartar Cuisine
by Alina Bronsky 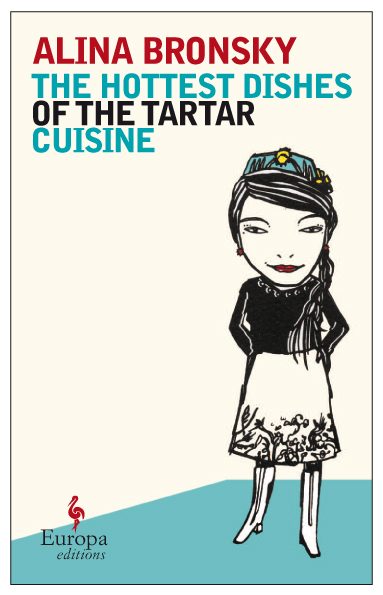