I first encountered Abigail Thomas’s Safekeeping: Some True Stories from a Life six years ago, during my first semester of a graduate program in creative writing and at the suggestion of my thesis advisor. At first, I assumed my professor wanted me to study the book’s structure. Safekeeping is built of three sections (“Before,” “Mortality,” and “Here and Now”), each composed of vignettes, some three or four pages in length, and many as short as a paragraph.

This structure—vignettes, collected and individually titled—conveys Thomas’s motivation: to take stock of memories and moments previously unorganized, perhaps even hidden or ignored, to give her past meaning and achieve what is suggested in the epigraph, taken from the Beatles song “Hey Jude”: Take a sad song and make it better.

But what I love as much as Thomas’s unique structure is that her “sad song” is utterly domestic, composed of a young, lost mother, four children, three marriages, and grandchildren.

Though Thomas and I are a generation apart, her focus on a domestic life and the internal conflicts that can foment, surprisingly, in that domestic space—say, scrambling eggs for dinner (or, more dramatically, looking back on the young woman who once scrambled eggs for dinner)—were powerfully resonant. I, too, had married and started a family young, and by the time I’d found my way to graduate school in my late thirties, I was, right or wrong, remorseful about some of the choices my earlier self had made and was wondering what I had missed. I hadn’t lived alone, or established a career, and I suspected, deep down, that I hadn’t taken a more independent path because I’d been scared. I was angry with myself about this, and holding onto that anger was damaging myself and my writing. Indeed, a few pages into Safekeeping, I realized it probably wasn’t the book’s structure my professor had wanted me to study at all.

Thomas writes to figure out who that young woman was who got her to now. To come to any sort of answer, Thomas needs considerable distance. Many vignettes are written in third person, a choice that says, That woman back then is not me. Other scenes are conversations between Thomas and her sister, a woman intolerant of the easy, inaccurate explanation. In a section aptly titled “No Underwear,” Thomas suggests, “Maybe I just wanted attention, like a six-year-old who knocks the lamp off the table while his folks read the paper. . . . How about that? Does that hold water?” Her sister thinks not. “‘No,’ [her sister] says, but her voice is patient. ‘What do they want,’ she asks, ‘those young girls who are so promiscuous?’” And the sister pushes until Thomas arrives at the painfully honest—and truest—conclusion.

This honesty saves Thomas’s writing from ever dipping toward solipsism, and also illustrates the immense challenge and discomfort in leading what Socrates deemed an “unexamined life.” But on the far side of discomfort is compassion. Thomas hints at this in the early vignette “Respect for My Elders.” “I don’t mean to sound bitter,” she writes. “I’m not bitter. I am only a little bit amused, looking back, this view from the person I have finally become.” This compassion builds so that by the book’s end, I’m left with the triumphant feeling that nothing in Thomas’s life is regrettable, not the nights she served dinner to her kids on an overturned kitchen drawer because she had no table, not the days she spent pretending to look for work (but wandering instead) after her second divorce, not the affairs she had with bosses so much her senior, in both age and status, that even in bed she called them Mister. She uses it all, pieces it together, as if to say “I forgive you,” or perhaps even “Thank you” to that younger, misguided self. Indeed, the Beatles’ call to “take a sad song and make it better” is precisely what Thomas achieves, and beautifully.

Jamaica Ritcher is a writer, and manager and event coordinator at BookPeople of Moscow, in Moscow, Idaho.

Safekeeping: Some True Stories from a Life
by Abigail Thomas 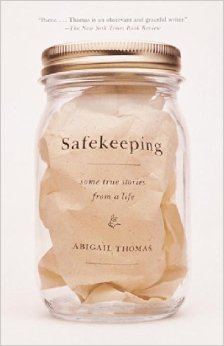 |+| Add to Your Shelf
Safekeeping: Some True Stories from a Life
Abigail Thomas

A Memoir that Beautifully Examines an Ordinary Life