During the spring of 2014, exactly one year ago, I was getting ready to graduate from college. I had started packing up my dorm room, writing my last papers, thinking about loose ends, and mentally sorting through my list of friends and dividing them into “good-bye for now,” “good-bye forever,” and “not saying good-bye.” Still, I was remarkably zen about the whole thing. I felt like I’d accomplished what I’d wanted, met good people, and was headed in a direction I’d worked hard for.

And then, I spent a gray afternoon in Barnes & Noble, where I found Marina Keegan’s The Opposite of Loneliness. I’d heard of the Yale Daily News essay she’d written in 2012 that went viral shortly after her tragic death five days later, but was surprised to see a book on the “New Releases” shelf with her name on it. I realized it was a posthumous collection of her stories and essays, some published and award-winning, written while she’d been at Yale. I picked it up, and it made its way back to campus with me.

A week or two later, finished with classes and suddenly in possession of a bizarre amount of downtime, I grabbed it off the stack of books on my windowsill and started to read:

We don’t have a word for the opposite of loneliness, but if we did, I could say that’s what I want in life. What I’m grateful and thankful to have found at Yale, and what I’m scared of losing when we wake up tomorrow after Commencement and leave this place.

It’s not quite love and it’s not quite community; it’s just this feeling that there are people, an abundance of people, who are in this together. Who are on your team.

It was like hearing a song at just the right moment, a song that completely sums up what you’re feeling and you didn’t even know you needed to hear, until you did. I was rendered speechless. I hadn’t been able to articulate exactly what I was feeling (or maybe refusing to feel) before leaving the people and place that had so fundamentally changed me, until I read those words. Before I knew it, I was halfway through the book, and it had literally brought me to tears.

A collection of short fiction and personal essays, The Opposite of Loneliness reads like your early twenties in real time, touching on friendship, love, jealousy, self-discovery, family, and the one thing you’ll always love, no matter what: your first car. It’s heartfelt, heartbreaking, and honest. Though she was by all accounts a literary wunderkind, nothing about Keegan’s writing is pretentious or unbelievable. She sounds like a girl in your class, a girl who lives in your dorm or who you see in the dining hall. There is a purity and innocence to her work, just a girl writing for herself, posterity, and school assignments, oblivious to how her own story would end.

While the titular essay might be what initially brings readers to the collection, it’s the strength of her writing that will make you devour the rest of the book. The fiction is nuanced and tells stories that are striking in their depth and humanity. “Winter Break” describes the complexities of reuniting with your almost-kind-of-boyfriend when you’re back home for the first time during freshman year. But they’re not all about being in college. “The Emerald City” is a series of emails from William, a soldier in Iraq, to his girlfriend. “Challenger Deep” centers around five people trapped at the bottom of the ocean in a submarine.

The nonfiction is approachable and genuine, whether Keegan is talking about her gluten intolerance (“Against the Grain”) or an exterminator in Chicago (“I Kill for Money”). It’s all perfectly wrapped up with “Song for the Special,” an essay that shocked me with its poignancy. “Sometime before I die,” she writes, “I think I’ll find a microphone and climb to the top of a radio tower. I’ll take a deep breath and close my eyes because it will start to rain right when I reach the top. Hello, I’ll say to outer space, this is my card.” It was the saddest, yet most uplifting thing I think I’ve ever read.

As far as I’m concerned, The Opposite of Loneliness should be required reading for any college student about to leave (read: be shoved out of) the proverbial nest. And the number one reason—aside from Keegan’s unbelievable skill as a writer—is that, with the exception of the opening essay, barely any of it actually has to do with graduating college. It’s not about how to find a dream job, how to say good-bye to your friends, or how to make the most of free food and campus-wide Wi-Fi. It’s about transition and hope and the understanding that the things we feel at this age, so often dismissed as the self-absorbed effects of growing up Millennial, have worth and meaning, and can be transformed into something remarkable. Reading Marina Keegan made me feel, if you’ll forgive the cliché, the opposite of lonely. I felt that somewhere, there was a soul who really got it. Someone who understood, even if for just a short time, what all this was about, and found the words to help the rest of us figure it out, too.

Julianna Haubner works in the Editorial Department at Simon & Schuster. You can follow her on Twitter @jhaubner2.

The Opposite of Loneliness
by Marina Keegan 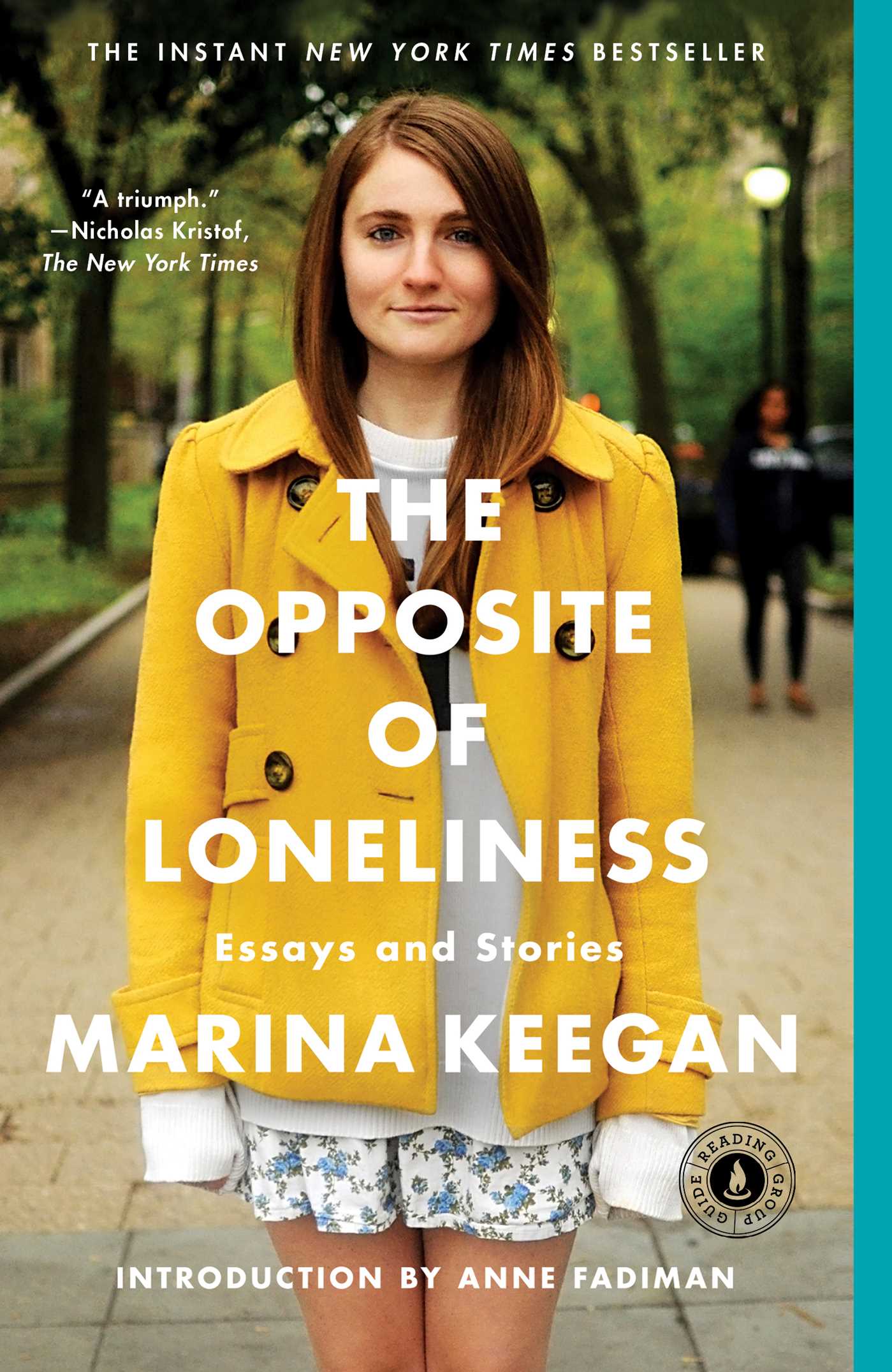 Notice: Trying to access array offset on value of type null in /home/offtheshelf/public_html/web/app/themes/ots/_inc/template-parts/books/book-modal.php on line 31
|+| Add to Your Shelf
The Opposite of Loneliness
Marina Keegan

“A collection of short fiction and personal essays, THE OPPOSITE OF LONELINESS reads like your early twenties in real time, touching on friendship, love, jealousy, self-discovery, family, and the one thing you’ll always love, no matter what: your first car.”