Editor’s Note: In 1987, Richard Rhodes published The Making of the Atomic Bomb, which won the Pulitzer Prize, the National Book Award, and the National Book Critics Circle Award. In 2012, Simon & Schuster published the Twenty-fifth Anniversary Edition of this important work.

The Making of the Atomic Bomb remains the seminal and complete story of how the bomb was developed, from the turn-of-the-century discovery of the vast energy locked inside the atom to the dropping of the first bombs on Japan. Told in rich human, political, and scientific detail, The Making of the Atomic Bomb is a narrative tour de force and a document with literary power commensurate to its subject. As we approach the seventieth anniversaries of the bombings of Hiroshima and Nagasaki, Richard Rhodes offers these reflections.

Seventy years after the atomic bombings of Hiroshima and Nagasaki on August 6 and 9, 1945, the debate continues about whether or not the United States should have unleashed such fury on two cities with largely civilian populations. When I wrote about the atomic bombings in my book The Making of the Atomic Bomb, I was writing history, not opinion, so I concentrated on telling the story in as much detail as I could—not only from the American perspective, but also from the Japanese. I learned a lot writing The Making of the Atomic Bomb, including that there’s always more to learn. All these years later, the bombing question still seems to me to merit multiple answers: whether or not the atomic bombings were justified depends on your point of view.

Today, American schoolchildren stage mock trials of President Harry Truman, who authorized the bombings, to decide whether or not to impeach him for his decision. It’s easy to forget how things were seventy years ago from the relative safety of our twenty-first century vantage point. Truman’s secretary of state, Jimmy Burns, told the President that summer of 1945 that he would probably be impeached if he didn’t use the bombs if they would save American lives. I’ve known many veterans who were spared the invasion of Japan who say, “Thank God for the atomic bomb.”

This moral quandary shows up at larger scale in the history of the Second World War. When the war began in September 1939, President Franklin Roosevelt appealed to combatants on all sides—Germany, France, Italy, Great Britain, the USSR—not to bomb civilians. But wars get worse as they bleed on, and by 1943 the United States itself, not yet prepared for a ground invasion, had begun aerial bombings of German cities. In the spring of 1945 that effort extended to Japanese cities as well. More people died during the firebombings of Dresden and Tokyo than died at either Hiroshima or Nagasaki, but because atomic bombs were weapons of mass fire, the destruction in Europe and in Japan was comparable. Truman’s decision in August 1945 to drop the atomic bombs rather than conventional bombs on Japan was an extension of a policy of bombing civilian populations that had been in place since 1943.

Writing history is always provisional. While my original research indicated that the atomic bombings did indeed shorten the war, recent scholarship in Japanese, American, and Russian archives has revealed that the atomic bombings served a secondary role in forcing Japanese surrender. The ultimate turning point was Russian entry into the war in the Far East on August 8. Joseph Stalin, wanting to extend the sphere of Soviet influence into Japan itself, was planning to invade Manchuria on August 15. After seeing the first film footage from Hiroshima and expecting an immediate Japanese surrender to the US, he moved up the Soviet invasion date. When the Russians came in, the Japanese leadership, whom even the atomic bombings had not yet convinced, finally understood that their country was defeated. We may be grateful the Japanese surrendered when they did. The US had more atomic bombs in the pipeline; the next target was to be the Japanese railway system, which would have cut off the food supply to an already starving population. Thousands of British and American prisoners of war in Japan were starving as well.

Something else I thought I recognized twenty-five years ago has now accumulated that many more years of evidence: the development of nuclear weapons permanently changed the course of war itself, as the scientists who worked on those first bombs hoped it would. By packaging the escalated final destructive months of war into portable devices capable of immediate and certain delivery, the new weapons made large-scale war too deadly to fight. From a high of fifteen million in 1943, man-made deaths dropped to between one and three million annually since 1945, and have remained at that ugly but low level in all the years since. That’s nothing to be proud of, to be sure, but in the long history of human slaughter, it’s also no small achievement.

The Making of the Atomic Bomb
by Richard Rhodes 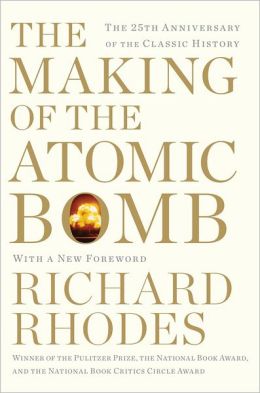 Notice: Trying to access array offset on value of type null in /home/offtheshelf/public_html/web/app/themes/ots/_inc/template-parts/books/book-modal.php on line 31
|+| Add to Your Shelf
The Making of the Atomic Bomb
Richard Rhodes

TWENTY-FIVE YEARS after its initial publication, The Making of the Atomic Bomb remains the seminal and complete story of how the bomb was developed, from the turn-of-the-century discovery of the vast energy locked inside the atom to the dropping of the first bombs on Japan.