“In a hole in the ground, there lived a hobbit.” It’s a quiet, humble beginning to an epic fantasy adventure tale, but then, hobbits are quiet, humble creatures. Despite this, a little hobbit is the hero of J. R. R. Tolkien’s adventure tale The Hobbit, prequel to his famous Lord of the Rings trilogy.

It all begins in the Shire, a quiet, idyllic community inhabited by hobbits. At about half the size of a human, hobbits are small in stature but rich in warmth; they are a peaceful race who love predictability and a relaxing evening at home by the fire. Certainly they are not adventurers or rabble-rousers—in fact, doing anything unexpected is frowned upon in the hobbit community. Bilbo Baggins is a very respectable member of his community who spends his days smoking his pipe, reading his books, eating frequent meals, and drinking tea in his cozy hobbit hole; he certainly never goes on any adventures or does anything unexpected. That is, until one day thirteen loud, boisterous dwarves show up on his doorstep and force their way in with no explanation whatsoever. Against all odds, the wizard Gandalf has chosen Bilbo as the fourteenth member of the dwarves’ dangerous expedition to slay a dragon and reclaim their homeland. He is to be their burglar, tasked with sneaking into the dragon’s lair to assess the situation and steal a very important jewel. So it is, despite his protestations that he is unfit for such a quest and is certainly not a burglar, that Bilbo reluctantly sets out on a great adventure.

Tolkien’s imagination and world-building skills are absolutely unparalleled. Every detail in Middle Earth, every type of creature and every sword and every place, has a detailed backstory and history. Bilbo’s great adventure involves such richly imagined elements as massive poisonous spiders, an attack by carnivorous trolls, a riddle battle with the sneaky and treacherous Gollum (keeper of the infamous ring), being kidnapped and imprisoned by angry forest elves, a ride on the back of a giant eagle, and even a one-on-one confrontation with the dragon, Smaug. To read this book is to completely lose yourself in Tolkien’s magnificent Middle Earth—quite possibly the most well-developed and vividly imagined fantasy realm of all time.

But The Hobbit means more to me than fantastical escapism. My copy is dog-eared and faded, with my name written on a peeling nameplate in the front in the wobbly handwriting of a child. What keeps me coming back to it? At 4’10”, with unruly red hair and a quiet, bookish disposition, if I were a resident of Middle Earth, I would most certainly be a hobbit. Not a lithe, ethereal elf or an adventurous dwarf or a wise and powerful wizard. Just a hobbit. Which is exactly what Bilbo fancies himself—just a hobbit, content to live out his days in peace and quiet in his cozy hole in the Shire. But there is so much more to Bilbo than anyone knows—though he is more used to wielding a gardening spade than a sword and would prefer an uneventful night at home to an adventure, throughout the novel he exhibits incredible courage, cleverness, and resourcefulness. Bilbo is ultimately the only one who can rescue his friends from several sticky situations, the only one who can retrieve the stone from the dragon, and the only one who is able to save Thorin, the leader of the dwarves, from his own ruinous prejudice and greed. He is a fiercely loyal friend, a brave warrior, and even a pretty good burglar.

It turns out that Bilbo is a hero. No one would ever have guessed it. No one, that is, except Gandalf. From the very beginning, he says, “There is a great deal more in [Bilbo] than you guess, and a deal more than he has any idea of himself.” This one sentence, to me, is the very heart of The Hobbit. Little Bilbo learns that there is much, much more to him than he ever believed, and that even the smallest and quietest and least outwardly impressive person can have greatness within them. In the real world, you will not be battling a man-eating spider or saving your friends from a hungry troll or engaging in a battle of wits with a Gollum (I hope). But if you ever need a boost to feel like you have what it takes to surmount the challenges in your life, I suggest picking up The Hobbit. 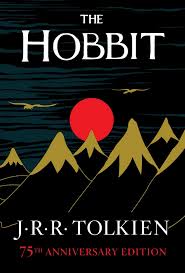 The enchanted adventure tale of Middle Earth, Bilbo Baggins, Gandalf, Smaug the Magnificent and, of course, the Ring. The classic that has thrilled millions and launched two film franchises. Who but Mr. Cumberbatch could have voiced that dragon?