“Mom, were you alive during the Vietnam War?” My middle school daughter often “fact checks” history versus my existence. At least asking about Vietnam wasn’t as far off base as when she once asked me if I was around for Prohibition. She brought up Vietnam because she was reading The Things They Carried by Tim O’Brien. I remember reading the book and I consider it a book I would recommend if someone asked me about it. The problem was, when I tried to remember specifics, apart from remembering that one of the things carried was a photograph, I couldn’t come up with much else. My excuse is that I read it a long time ago, but still.…

It was time to get to my bookshelf and find my old copy. As I began to read, it’s like a new book and an old book at the same time. I’ve definitely been to this corner of the Vietnam jungle before, and the members of Alpha Company are looking more and more familiar, but it’s like a half-remembered dream that somehow suddenly comes into full consciousness. And it’s not really a nice kind of dream either. It’s a sweaty, feverish, disjointed dream. Tim O’Brian enlists us as one of the company who are witness to the strong friendships, the warped perspectives, the death, the destruction. The Things They Carried is powerful and sad. It’s about the war but it’s also about writing, about truth, and about loss. It’s about what is left out in the telling, the lies, and what you never lose if you fought this particular war alongside the narrator. It’s not just about what they carried into war, it’s about what they carried out of the jungles of Vietnam and what resides inside them (particularly the narrator) long after the last helicopter has flown from the last battle site.

My daughter finds many of the stories sad and a bit confusing. In “Sweetheart of Song Tra Bong” a girl (not that many years older than my daughter) comes to Vietnam and is captivated by the country so much that she becomes consumed by the jungle both literally and figuratively. There is a scene where the girl, Mary Anne, dances in the firelight, her neck encircled by a macabre necklace made from human tongues. My daughter deemed it “creepy” and I probably felt the same way at her age. From my current standpoint, my heart aches for the girl, her family, and the soldier who, in a misguided attempt to bring something “normal” to the jungle, brought her to Vietnam. It seems an unlikely occurrence but the way it’s told, the tale feels palpably real. In O’Brien’s telling, anything seems possible.

My daughter doesn’t have much context for reading the book (“Mom, who is LBJ?”), and I am happy to be able to fill her in. But even without context, she is able to appreciate the power of the writing to convey the soldiers’ experiences. She can appreciate how sometimes a good story can be horrifying and how the truth can be bent in the telling.

If you had asked me what book my daughter and I would read together someday, I probably would have come up with Little Women. I’m confident that when I first read The Things They Carried, I never imagined that someday I’d be reading it alongside my middle-schooler and talking about things like dying and killing and suffering. As dark as the book can be, it’s helped me to shed light on a time in American history that she knew little about, to open discussions about writing, and to pave the way for doing this again. I can’t wait to see what she’s assigned to read next.

The Things They Carried
by Tim O' Brien 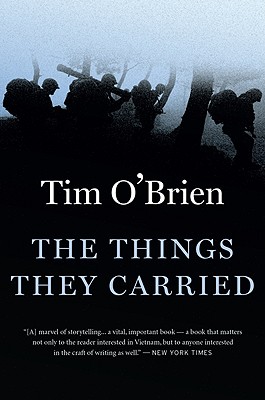 |+| Add to Your Shelf
The Things They Carried
Tim O' Brien

11 Groovy Books That Will Transport You Back to the ‘60s

11 Powerful Books That Explore the Legacy of the Vietnam War

I Never Thought I’d Read This Book With My Daughter