A.A. Milne wrote the first mommy blog. Nowadays all one needs to create a storybook vision of his child is an Instagram account and a smart phone. Before all of us were able to package our lives and wrap bows around them for public consumption, it required more artistry and effort. It also required, for Milne, the help of an illustrator named Ernest Shepard.

In When We Were Very Young and Now We Are Six, Milne and Shepard created a vision of childhood that simultaneously captured the idyllic life of the real Christopher Robin and did much to destroy it. Christopher Milne details his grievances with impeccable specificity in his first autobiography, The Enchanted Places.

Among Christopher’s many charms is his stodgy fidelity to accuracy. His odyssey through his early years is an exacting and intellectually determined exercise. He disentangles himself from the mythology and sheds light on the workings of his father’s mind. The result is a page-turner.

I found The Enchanted Places in the least enchanting place: the Internet. As a nanny, I had worn out several copies of When We Were Very Young and Now We Are Six. I yearned to know more about the poet and illustrator behind these soft-spoken, whimsical glimpses into childhood wonder, innocence and freedom. It never occurred to me that the boy in so many of the poems was real.

I found many photos. The farm at Cotchford. The stuffed toys on which Pooh and Piglet and Eeyore were based–they’re under glass at the New York Public Library. A.A. Milne seated on the couch with his son. Christopher Robin Milne climbing a tree while clutching Pooh. The last image is startling: Shepard put this boy under glass when he drew him, so accurate is his representation. Time cannot touch his childhood.

A.A. Milne’s volumes afford the adult Christopher a rare opportunity to parse his own childhood memories. Most people don’t have an array of stories and poems to help them recall moments from their youth. Whether he is refuting aspects of his father’s account or acknowledging the accuracy of others, in The Enchanted Places, he is using a vast baby book that most grownups don’t possess. The poems and his resulting public image stole his identity and privacy, but at least they gave him a compensatory opportunity for self-examination.

It’s clear that he loves his father. He thinks him a decent, gentle and loving man. A.A. Milne never used his paternal authority to tyrannize his child. In fact, Christopher writes, his father was very uncomfortable with the notion of social class because it led to imbalances in power and prevented friendships and discourse with people from all walks of life.

Still, the younger Milne has grievances. For one, many of the sentiments expressed in the poems are actually A.A. Milne’s childhood memories: the character of Christopher Robin is merely a vessel. Other poems portray real interests of his son, such as engineering, but Christopher emphatically states that if he were making a train, it would work.

His thoughts on the poem “Vespers” are compelling, partly because the poem is (nearly) universally beloved. “Vespers” eavesdrops on Christopher saying his nighttime prayers. The grown-up Christopher finds in it a portrait of childish narcissism and a dismissal of the significant concerns a young boy might have in life. He writes that his father saw children as despots, who see the world narrowly and should not be romanticized.

I don’t see such a portrayal in the poem. Perhaps when you have the proximity to the writer that a son has, you see cynical innuendo that might not be there. Or perhaps he is right: it’s a nasty poem hiding behind a mirage of childish forgetfulness.

His largest complaint is the high profile the poems forced on him and the damage to his social relationships that resulted.

Christopher recounts a reporter’s visit to the family’s residence at Cotchford Farm. He ponders what her mental notes must have been as she drove off from her afternoon with the “real” Christopher, in the “real” Five Hundred Acre Wood, at the real Poohsticks Bridge. She had concluded her interview with this question:

“How has it affected him, being, you might almost say, a household name?” Mr. Milne had answered this question rather more slowly, more thoughtfully, perhaps less confidently. “He hoped it had done him no harm, might even have done him some good.”

Now we ask a variation of this question constantly. Every time someone shares a photo of his child, every time a writer tells a story about her toddler and supplies an accompanying photo for the consumption of strangers, we wonder if parents are altering their children’s futures. Some are sounding alarms and encouraging people to exercise caution. Will our children’s paths be altered by a public record they had no say in creating? Will those children who don’t manage to escape the limelight their parents shine on them lose control of their narratives many years later, the way Christopher Robin Milne did? Did A.A. Milne have the right to impersonate and spy on his son for artistic fulfillment and profit? Does a child not have a right to his own image and personhood, just because he is too little to object to its theft?

If you want to see how one such experiment turned out, read The Enchanted Places. Christopher Milne loves a good inside story, as long as it’s told by its rightful owner.

The Enchanted Places
by Christopher Milne 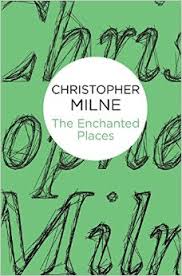 |+| Add to Your Shelf
The Enchanted Places
Christopher Milne