It’s a new year, a time for resolutions, and mine are as ambitious and unlikely to succeed as ever. Most of them involve perfecting methods of organization that will allow me to fit more work into tinier amounts of time. A year of lifehacks in which efficiency is key, every inch of 2015 will be used for something productive, each increment of time carefully charted out. My days will be like little bento boxes, with appropriately sized compartments for time spent working, swimming laps, writing, reading, yoga, movie-watching, and cooking (sleeping?).

Not even halfway into the month my resolve has already faltered; all it took was rereading Bel Canto by Ann Patchett to realize that life is not meant to be hacked. Set somewhere in South America at a birthday party hosted by the country’s vice president, Bel Canto is the most meditative, elegant, dreamlike hostage-takeover novel you will ever read. When terrorists break into the party and hold everyone for ransom, the worlds of captors and captives alike shrink to the size of the vice president’s living room and for weeks on end there is nothing but four walls and a seemingly endless expanse of time. As the days wear on, restless waiting and wanting become blissful time for reflection, for learning other languages, for listening to music, and for truly understanding and appreciating the others in the house, despite their differences.

There are also guns and threats and Red Cross negotiations, but at some point, for the people inside the house, the situation starts to feel less like imprisonment and more like a utopia. It certainly doesn’t hurt that they are trapped inside an extravagant mansion with a famous opera singer, the bewitching and impeccably elegant Roxane Coss, with whom everyone is in love. When the generals and their army of teenage bandits realize that the president they are planning to kidnap is not among to hostage partygoers, they decide to keep Roxane and release all of the other women and children.

Eventually General Benjamin, the nicest of the generals, a former school teacher with a bad case of the shingles, allows the Red Cross negotiator to bring into the house a box of sheet music so that Roxane can practice. General Benjamin begins to play chess with the Japanese businessman Mr. Hosokawa to take his mind off of his shingles. Mr. Hosokawa learns ten new words a day in English and in Spanish from Gen. Gen—my favorite character, Mr. Hosokawa’s smart, loyal, and slyly funny translator—is always in high demand from an international group of diplomats, businessmen, and terrorists who cannot speak to each other. But he still finds time to fall into an impossible, beautiful, heart-melting love. The loud, cigarette-smoking Russians also fall in love, this one unrequited, with the soprano. Everyone gathers in the mornings and later in the afternoon to listen to Roxane practice her arias. Everyone has plenty of time to think about their family, their life at home, the things they wish they had done. Everyone will eventually forget all of that.

Patchett has written a riveting story of danger, suspense, and foreign tensions in Bel Canto, but honestly you hardly notice. Her writing is so precise, so elegantly rendered that the larger plot unfolds almost imperceptibly around the many quieter narratives that Patchett focuses in on. Each subplot sharpens the image of individual characters, their pasts, regrets, fears, and desires. Once you come to and realize that you’ve been ripping through the book like a heist story, you’ve already developed a deep empathy for all of the characters, terrorists and hostages alike, and feel as though you know them intimately.

Patchett plays with a sense of time in her writing: sometimes weeks pass in a few sentences and other times you feel like time has stopped and you are held suspended inside those crystallized passages. Hostage situations never seem to end peacefully, and I found myself dreading the end of the novel for many reasons, not least of which because it was such an enjoyable read. But like all good stories, Bel Canto holds the reader captive long after the book has ended and you’re free to go. 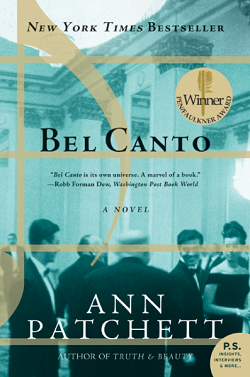 Ann Patchett’s 2001 novel is set somewhere in South America at a birthday party hosted by the country’s vice president. Rozanne Coss, opera’s most revered soprano, has just finished a mesmerizing performance when a band of terrorists breaks into the house and holds everyone for ransom. Salon calls Bel Canto “a story of passionate, doomed love; of the glory of art; of the triumph of our shared humanity over the forces that divide us.” OTS calls it “the most elegant, meditative hostage-takeover novel ever.”