Richard Paul Evans’ classic, The Christmas Box, feels more like a book written a hundred years ago rather than one written in 1993. A charming tale simply told about the power of love and the importance of family, it is the kind of old fashioned story that you could imagine as a black and white movie from the 30’s or 40’s starring Jimmy Stewart as the father and Ethel Barrymore as the widow.

Rick, Keri and their small daughter, Jenna, are struggling financially and can’t afford much of a place to live. They answer an ad in the paper from someone with rooms to let in exchange for help around the house. When they get to the address for the interview they realize it is not a house but the town’s mansion and the owner is an elderly widow, Mary, who doesn’t need help has much as she needs companionship.

As soon as they are settled in, Rick discovers a beautiful music box hidden in the attic and takes it down. It is filled with love letters written decades earlier and he spends much of his time struggling to find out to whom they were written and why. The mystery is not solved till the end of the book and I don’t want to give away the secret but it is a sad story.

A small gem of a book in a beautiful package and originally written only as a gift for Evan’s children, this is a story that, like A Christmas Carol or The Gift of the Magi, gives meaning to the season and should be pulled out and read every year.

Like those books it has a universal message at its heart- in this case it is the warning that work is a means to an end not an end in itself – and that focusing on getting and spending can indeed lay waste our hours.

Rick dedicates his hours to growing his business not realizing that in trying to build a better life he is becoming estranged from his wife and daughter. It is only when the secret of the Christmas box is revealed that he understands the enormity of what he might have lost.

Work has a way of creeping up on you, of tricking you into believing that the meeting or phone call or report that absolutely must be done before the end of the day is the most important thing. It has been said that no one on their deathbed ever regretted not spending more time at the office but they have regretted not spending enough time with the people they loved. The Christmas Box delivers this message movingly, powerfully and beautifully. It is the perfect holiday story. 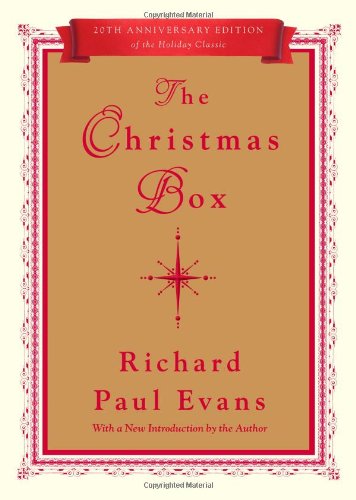 |+| Add to Your Shelf
The Christmas Box
Richard Paul Evans

The Perfect Book for the Christmas Season