Sometimes, when we experience something as children that is too terrifying or unbelievable to remember, our brains hide it from us for our own protection. Then, years later, it can all come flooding back, triggered by an experience or a sight or even a word, like “ocean”. But memory is subjective – it can come back delicate, bathed in fluid surrealism. This is how it all comes back to the middle-aged male narrator of The Ocean at the End of the Lane by Neil Gaiman.

Gaiman’s narrator dutifully speaks at a funeral and in the time between the service and reception, he takes a drive to his childhood home but, upon arrival, feels inexplicably drawn to the small farm at the end of the lane. There he meets a woman that he vaguely remembers as the mother – or grandmother – or some relation – of his childhood friend, Lettie. He asks to sit by the pond they played next to as children and the woman points him in the right direction. The narrator vaguely remembers that Lettie didn’t call it a pond. She called it…a sea? No, an ocean, she called it an ocean. With that one word, the memory of a childhood battle for survival against evil so terrifying the narrator has never thought of it since it happened washes over him and he is swept back to the menacingly magical time of his youth when his life was barely spared.

When the man was seven years old, a stranger stole his family’s car, drove it to the end of the lane, and committed suicide. This stranger had gambled away his own money and that of his friends and died wishing that he could conjure more money to rectify his mistakes and make everyone happy. It is on the confusing and upsetting day when the body is discovered that the boy meets Lettie Hempstock, the girl who lives on the farm at the end of the lane with her mother and grandmother. Lettie is mysterious and magical and wise beyond her years and she tells the boy that they must be very careful because the stranger’s suicide has unleashed a demon into their world. This demon will seem normal and will offer to help people by giving them money, but the money comes with dreadful consequences. The boy doesn’t understand. He wonders how the gift of money could be a problem, until a tyrannical new nanny comes to live with them and so charms the boy’s family that she takes control of them. Only he can see her for the demon she is. He and Lettie Hempstock, that is, to whom he escapes whenever he can. Together, these children must combat the demon and her terrifying, world-eating friends and send them back from whence they came before it is too late.

The narrative is a frame, so after the conclusion of the narrator’s remembering the terrible details of how he and Lettie defied the evil demon, we return to the present, where he is bidding good-bye to his hostess at the farm, telling her to let him know if Lettie writes from Australia. It is clear that as quickly and powerfully as the memories came back, they have just as suddenly disappeared.

Gaiman’s short novel has the magic and horror of a classic fairy tale and the ethereal quality of a half-remembered dream. He beautifully captures what it means to remember and what it means to forget and the space between those two. It also captures something so true of childhood, articulated by an epigraph by beloved children’s author Maurice Sendak, “I remember my own childhood vividly…I knew terrible things. But I knew I mustn’t let adults know I knew. It would scare them.” Ocean’s young narrator captures this to a “t”; he knows that the beautiful woman insinuating herself into his family is not a woman at all, but a monster who could destroy their entire universe. But who is he to tell? Who would believe him? Children are perceptive and sensitive to things around them – sometimes, evil things that adults can’t see or understand – and they somehow know that these things must be faced alone. Luckily, this young boy is not entirely alone – he has Lettie and her incredible family.

Besides the masterfully crafted tone and luminous language in Ocean, my favorite aspect is the wonderful intergenerational family of Hempstock women that Gaiman has created. From the moment the boy meets Lettie and her mother and grandmother, we know that they are different. At one of his first meetings with Lettie, the boy asks her how old she is. When she says eleven, he thinks for a bit and then asks, “How long have you been eleven for?” There is an unspoken sense that the Hempstocks are very old and very wise, like eternal mothers and guardians of our world. They are kind and maternal, caring for the children and making pancakes and comforting the boy when he is frightened. But at the same time, they are tough and brave, even young Lettie, who faces down the demon herself and makes a great sacrifice to protect her young friend. But even with Lettie gravely injured, the women are calm and meditative, knowing that when she is healed and ready, she will return to them.

This terrifying, beautiful, dreamy adult fairy tale is one of the most captivating and skillfully crafted books I’ve read in years. And I read a lot. His novel has the lyrical quality of poetry and the enchantment of a Grimm tale. Gaiman is a master of imagination and of horror that is not gruesome, but deep and psychological, and is a true wordsmith.

The Ocean at the End of the Lane
by Neil Gaiman 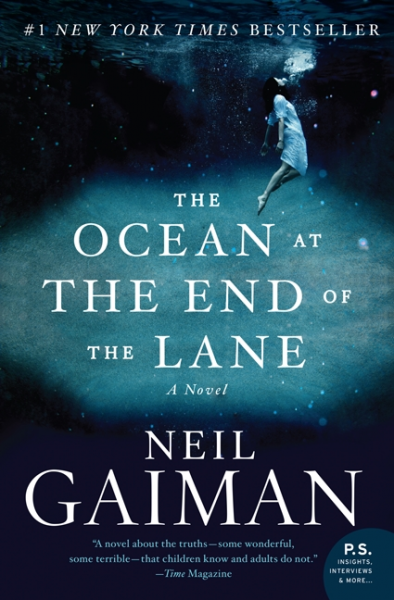 An imaginative and poignant adult fairy tale from the modern master of wonder and terror. This bewitching and harrowing story of mystery, survival, memory, and magic makes the impossible all too real.

5 Books to Read if You Love READY PLAYER ONE

A Horror Story Dressed As a Fairy Tale