Dirk Gently’s Holistic Detective Agency was published the year I started working as an assistant at Simon & Schuster. Everyone was quite excited about it and I believe it hit the bestseller list. It was also one of the first books I took home for free. Imagine making absolutely nothing but getting to take home hardcover books whenever you wanted. It was a perk I never imagined when I got the job and it’s one I still love.

I think I liked this book initially because it was free but I fell in love with it as soon as I started reading and it has stuck with me for years. I gave away that first edition to someone I don’t even remember and over the years have given away many subsequent copies as well (another perk of working in publishing) but I never kept a copy for myself. The story was so lodged in my head I didn’t ever need to re-read it. But if you are reviewing something, it’s always good to have it to hand so I borrowed a yellowed mass-market paperback from a friend. Even in a crinkly odd-smelling ancient copy, the story is still the great one I remembered.

Certain parts of it, the dead man trying desperately to make a call to his sister, the couch that is stuck halfway up the stairs with a computer program running 24/7 trying to figure out how to get it unstuck are two of the saddest and funniest things I think I have ever read.

It is a crazy story and one that you can’t really contain in a review but basically an error on a spaceship eons ago set off an explosion that killed every being on board. The lone survivor of this catastrophe, who had not been on board and had actually caused the big bang, has floated through time ever since trying to correct his error and get home. He thinks he has found a way when he discovers a time-travelling professor at St. Cedd’s College, who he believes he can coerce into going back to the beginning. Somewhere along the way, things go awry.

Our hero, so to speak, is Richard – friend of said professor and employee of Gordon Way the head of a hugely successful computer software company, WayForward Technologies II, which has become hugely successful based on software Richard wrote. Gordon is also the brother of Richard’s girlfriend, Susan, and it is while Richard is trying to climb through a third story window to break into Susan’s apartment so that he can steal an audio tape on which Gordon has left a message that we meet the other hero (because it’s a tale that definitely needs two heroes) Detective Dirk Gently, of whom it is said: “There is a long tradition of Great Detectives, and Dirk Gently does not belong to it.” Great Detective or no, it is the extraordinary Dirk who will help find your cat while solving the mystery at the heart of the story, thereby saving the world from total destruction – all, might I say, at no charge. But how you get from the beginning of the story to the end is a double helix of absurd situations battling rational thought that lead to hysterical moments of monumental proportion.

If you mixed the philosophy-laced verbosity of Tom Stoppard, the witty science-fiction time travel of the Tenth Doctor, the laugh out loud absurd humor of Terry Pratchett, the clever one-step-ahead intelligence of Sherlock, and the eloquent lyricism of Neil Gaiman you would get a small idea of the genius of this book and its brilliant author, Douglas Adams.

The writing is so wonderful that I dare you to not underline as you go but it’s the story with all it’s loops and loose strings – some very funny, some challengingly clever, some so poignant you will cry– that keeps you turning the pages until the astonishing conclusion. 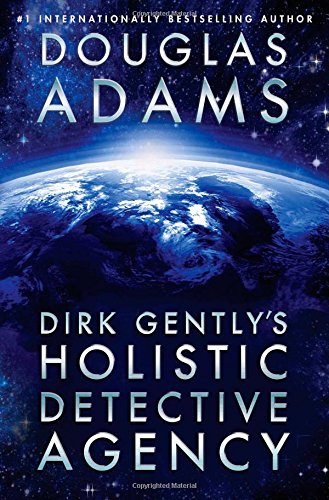 There is a long tradition of Great Detectives, and Dirk Gently does not belong to it. But his search for a missing cat uncovers a ghost, a time traveler, AND the devastating secret of humankind! Detective Gently's bill for saving the human race from extinction: NO CHARGE.