I have a confession to make and I hope you won’t judge me too harshly: frequently, more often than I should, I actually judge a book by its cover. It is not something I am proud of as it has more than once been the reason I did not choose to read a book that I wound up thoroughly enjoying later and it smacks of a lack of imagination. On the other hand since jacket art is about 80% of book marketing I am just responding as a consumer. If it were a pair of unappealing shoes I was passing by, I’d not think twice. But shoes are shoes and a book, well, as you know, a book is an offer of joy that should not be dismissed because the wrapping isn’t perfect.

J.K. Rowling’s The Casual Vacancy was a book I chose not to read because of the cover: red with a script title and a big X in a box. Where was the story in that? Also, to be honest, I wasn’t sure she had it in her to go from Hogwarts to adult reality and I didn’t want to risk it. I was wrong – not about the cover, which is too clever by half – but about Rowling not being able to make the leap. She is a gifted storyteller with an uncanny sense of the human psyche and she can wring your heart with a flick of her pen.

The title refers to a real thing that English readers would understand immediately: a casual vacancy happens when a parish councilman leaves office in any way except being voted out. Such a vacancy occurs right at the beginning of the book and it is this event that kicks off the series of revelations about the residents of Pagford , a quintessential small (and small-minded) English town, that Rowling weaves into a compelling tapestry, a little like the film Crash.

Pagford is one of those beautiful towns with a cobbled square and an old abbey that dot the English countryside. Everything seems so picture perfect and lovely but in fact the town is a seething viper’s nest of unhappy and self-centered people who once the vacancy occurs would knock over their own granny to get what they want. It seems that the demise of the councilor leaves not just a vacant seat but a hole where the heart of the town was.  In the hands of a lesser writer, these characters would all be odious clichés but Rowling peels back the façade of gentility to expose the naked truth about the illusions and delusions people create in order to live their lives and does it so well that each character comes at you fully formed. As she tells the story, Rowling often gets inside the head of each character to explain what they are truly thinking and what their motives are. And in revealing those details from the inside you develop a visceral bond with some of the characters. But you have to give her time. She is at work building a story that takes a while to reveal itself.

Rowling is brilliant at skewering middle-class pretensions, empty liberal posturing, and that peculiar obsession with class that is so English. She is also excellent at understanding what makes people tick. Each of her characters is so fully formed you will swear that you know someone just like them. At first there are a lot of them and their stories overlap so much it’s hard to keep them all straight but as the story unfolds and she reveals a little more with each scene each person become sharper and more distinct. She also tells the same moment from different characters’ perspectives which in the beginning has you whipping your head around to keep up with the story but as you read further and identify more with the characters gives you a grand cinematic feeling as you see how each person’s actions set up the next domino in the story.

There are so many stories in this one book that it would be hard to summarize them all but the premise is that the town is divided over whether and how to detach itself from The Fields, a housing project that is a blight and a drain on their economy. Whoever fills the council seat will swing the vote toward or against The Fields. The consequences of this campaign have repercussions for every character in ever family all the way to the last page. I laughed out loud often and at times I was appalled, I felt sorry for some of the people and I was happy I never had to deal with others. In the end I wept. 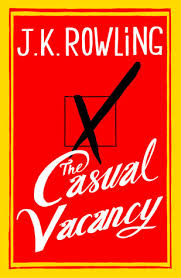 |+| Add to Your Shelf
The Casual Vacancy
J. K. Rowling