I have been reading a lot lately about Jon Stewart’s new film, Rosewater, the story of a journalist imprisoned for 100 days because of an interview he did about the country’s presidential election and it made me think of the haunting and heart-wrenching memoir, Prisoner of Tehran, that Marina Nemat wrote about her years as a prisoner in Evin Prison during the early days of the Iranian Revolution and the rule of Ayatollah Khomeini.

Nemat was a young Christian teenager who, before the Revolution, lived an ordinary life with her parents  in an apartment in Tehran. She was not untouched by the unrest in her country – a boy she loves disappears after an encounter with the police — but she still was free to read what she wanted, hold hands with a friend in the street, ask questions. Several of her friends protested against the Shah’s regime and although Marina participated in demonstrations alongside them, she did so against general injustice never taking a side for or against the Mojahedin, the Marxists, The Shah or other groups. A little naïve perhaps but what 15 year old is not naïve about her ability to change the world?

As movement, speech, and society become more restricted, Marina is furious that her new teacher is in the classroom not because she can teach but because she is with the Revolutionary Guards and is here to indoctrinate. When Marina asks her teacher to teach geometry instead of doctrine she is invited to leave the classroom if she is unhappy. Marina does and immediately becomes an enemy of the state.

How simple it is for them to come for her one night. No one can protest for fear of being taken too. Her parents can only watch and pray. Marina is swept into a black Mercedes, blindfolded and taken to Evin without a word. Still blindfolded she is led to a room where she is tortured by two men, one beats her feet so viciously with a rubber tube that she faints but he revives her so he can continue. The other man is gentler, more reasonable and tells her to give them the names of her co-conspirators and she will be spared. But it is a sadistic game: they already have the names and Marina is already scheduled for execution.

I don’t want to tell you anything more about the story because you have to discover it for yourself, but what happens after that night is a bizarre compelling journey that speaks to the hypocrisy of a fascist state and the tenacity of a 16-year-old girl who wants to live. There is evil, love, delusion, pain, loss, despair, faith, courage, fear, kindness, and hope in her story.

This book came about because Marina was haunted by nightmares of her time in Evin and by memories of the people she knew there. She had never been able to share her story with anyone and it was beginning to overwhelm her so she took a writing course in her adopted Canada to help her finally grapple with everything that happened to her. When she read her first piece in class another woman admitted she, too, had been a prisoner of Evin. They shared stories and the names of the people they lost, both women so aware that they were lucky to still be alive.

Marina is a direct graceful writer and her story is so compelling that you can’t stop reading. You will wonder more than once if you would have or could have done the things she did. You will argue with her to stop being stubborn and you will admire her inability to not give in. You will not begrudge her anger and you will applaud her ability to forgive. And when you are finished you will never forget what Marina lived through or that she shared her story with you.

Prisoner of Tehran
by Marina Nemat 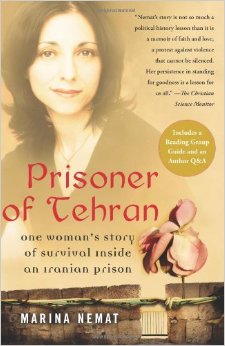 |+| Add to Your Shelf
Prisoner of Tehran
Marina Nemat

In her heartbreaking, triumphant, and elegantly written memoir, Marina Nemat tells the heart-pounding story of her life as a young girl in Iran during the early days of Ayatollah Khomeini’s brutal Islamic Revolution. Lyrical, passionate, and suffused throughout with grace and sensitivity, Marina Nemat’s memoir is like no other. Her search for emotional redemption envelops her jailers, her husband and his family, and the country of her birth—each of whom she grants the greatest gift of all: forgiveness.

Six Novels, No Packing: A Literary Guide to the Middle East

The Power of Memoir to Heal Unspeakable Pain

A Memoir of Faith and Love That Cannot Be Silenced