Tawni O’Dell is the New York Times bestselling author of five novels including Back Roads, which was an Oprah’s Book Club pick and a Book-of-the-Month Club Main Selection. Back Roads is currently in development to be made into a film by Michael Ohoven, the producer of the Academy-Award-winning, Capote.  Her works have been published in over 40 countries.  Tawni was born and raised in the coal-mining region of western Pennsylvania, the territory she writes about with such striking authenticity. She graduated from Northwestern University with a degree in journalism and spent many years living in the Chicago area before moving back to Pennsylvania with her two children.  Her fifth novel, One Of Us, was published in August 2014.

I was in my kitchen making dinner while mediating an argument between my children about who the dog liked best when I got the call from Oprah. I almost didn’t answer the phone and I’ve often wondered since if she would have left a message or just moved down her list to the next author she loved. Did Oprah leave messages?

What motivated me to reach for the phone was the knowledge that I was no longer just a thirtysomething mother of two and a half-hearted freelance journalist who had accumulated so many identically worded, infuriatingly vague rejection letters for my novels over the years that I had decided my epitaph should read, “Here lies Tawni O’Dell. Just not right for us.” My first novel had been published a month earlier to rave reviews. I had an agent, an editor, and a publicist; any one of whom might be calling me now.

I answered the phone.

“Is this Tawni O’Dell?” a female voice inquired.

I confirmed that it was.

“Hi, Tawni. This is Oprah Winfrey.”

“This is Oprah Winfrey,” she repeated.

There was no way I was falling for this. I had a cousin, Kenny, who was a practical joker. Despite being very close, I didn’t doubt for a minute that he could have orchestrated something like this.

“I’m not an idiot,” I said. “I know you’re someone my cousin Kenny got to impersonate Oprah Winfrey and it’s not even a good impression.”

During the next five seconds of interminable silence, a terrifying epiphany dawned on me. As inconceivable as it seemed to me, I was a novelist and Oprah did have a book club, a very, very, very large book club. Maybe this was real.
And it was. Once we established that she wasn’t pulling my leg and I apologized all over myself, she began bombarding me with questions about the book and I went blank and couldn’t answer a single one. “What’s the symbolism behind the kitten?” she asked.

“When did the mother know for sure?”

“Is this the author?” she finally wondered.

“Girl, you better reread that book,” she informed me, “because you’re going to be my April book club pick.”
I did what I was told. I reread that book. Several times. I studied my own novel like I was an English lit grad student writing a thesis on it. And I’m glad I did. Oprah and the four people she had selected from thousands of viewers who wrote in to be part of the book club segment knew Back Roads inside and out. They could quote passages. They saw a depth and relevance in my work that I hadn’t known I’d put there. At one point Oprah got so excited she turned to me and shouted, “YOU are a writer!” with such vehemence I held up a copy of my book to my face and hid behind it.
Meeting Oprah Winfrey was the thrill of a lifetime, and my gratitude was boundless for what she did for my career. I might have written a pretty good novel, but I had no delusions about its commercial success: Oprah put me on the bestseller list. But there was also a slight downside to all this positivity.

Being an Oprah pick is like being in a relationship with a really good-looking guy: It’s great for your ego and impresses other people, but fills you with paranoia and self-doubt. Do I deserve this? Am I good enough? Once this is over, will I ever experience anything this fantastic again? Will I even come close?

It also quickly became the only thing people cared about. Everyone I met wanted to know what Oprah was really like and no longer even asked about my book. When they did remember it, they seemed to forget that writing a novel required a lot of time, hard work, discipline, and yes, maybe even some talent, and instead told me how “lucky” I was and how the success I was enjoying was no different than “winning the lottery.”

Don’t get me wrong. The pros far outweighed the cons. Oprah even surprised me at the end of the show by bringing out my ninth-grade English teacher, John Sinclair. She had heard me say in an interview that he was the first person to tell me I should be a writer. We had a tearful reunion in front of her live audience and have kept in touch ever since. I always send him an advance copy of my latest novel, and he always grades it.

When I’m asked what aspect of my career makes me the proudest, being an Oprah pick would be an obvious answer, or being compared to such literary luminaries as Steinbeck and Salinger, or reaching that #2 spot on the New York Times bestseller list. (I never made it to #1. Damn you, Mary Higgins Clark.) But the truth is, I’m proudest of the fact that I have a career. I’ve persevered on my own. I truly am a writer just as my favorite teacher told me I should be and one of the world’s most admired, influential women gleefully proclaimed that I had succeeded in becoming. My fifth novel, One of Us, was published last week. I heard back from Mr. Sinclair today. Oprah would be proud. I got an A+.

One of Us
by Tawni O'Dell 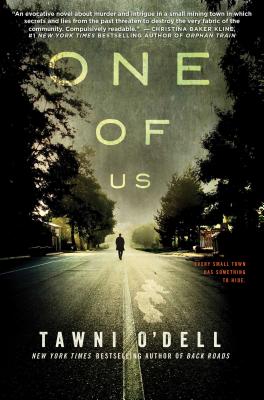 |+| Add to Your Shelf
One of Us
Tawni O'Dell