Unbroken, by Laura Hillenbrand, is a book that took me a long time to read. It’s not that I didn’t have access to a copy; a friend sent it to me right after it was published, but the book sat on my shelf, unread. I thought about reading it several times and I had many people—including a woman I did not know who pushed the book on me in my Laundromat on a hot summer Sunday—tell me how much they loved it and how much I would love it too. But I just couldn’t rouse myself to start reading.

I honestly never thought it would catch on—a story about a runner in WWII was no match for the mighty story of the champion horse Seabiscuit, the subject of Ms. Hillenbrand’s first book—but every week I opened the bestseller list there it was: its secure position on the nonfiction list proof that it was being read and adored by many. Part of my hesitation was a perverse loyalty to Seabiscuit but I was also afraid that I would be disappointed. I couldn’t imagine how Ms. Hillenbrand, as great a writer as she is, could ever write anything nearly as good as Seabiscuit. And because I was afraid I’d be let down by her sophomore work, I denied myself the thrill of being absolutely engrossed by it for over three years.

Louis Zamperini, a delinquent kid from Torrance, California, who became a 1936 Olympic runner and a record-breaking miler through his own hard work and the dedication and determination of his older brother Pete, gets drafted into the Air Force after the Japanese attack Pearl Harbor. During a mission to locate a downed plane, the rickety B-24 he is on goes down in the Pacific. Zamperini, Phil Phillips (his friend and the pilot of the plane), and Francis McBride (the tail gunner, a novice soldier on his first mission) are the only survivors. They spend forty-five days floating in their failing raft, starving and dehydrated, fighting constant sharks and somehow tackling every problem they encounter with determination, ingenuity, and hope. What faces them when they are rescued made me wonder if they wouldn’t have been better off going with the sharks.

Upon his “rescue” by the Japanese, Zamperini is saved from execution because his status as an Olympian offers the Japanese a special public relations opportunity. Unfortunately, it is his fame that draws the attention of one of the most sadistic, downright insane characters I have ever read about: Matsuhiro Watanabe, “The Bird,” who makes it his special mission to destroy Louis Zamperini. Hillenbrand pulls no punches in her descriptions of his psychotic brutality and the toll his persecution takes on Louis and the other prisoners of war. What is amazing is how strong Zamperini is in the face of the abuse; there is one scene of his stubborn refusal to be cowed so powerful that it made me cry.

The kind of savage, degrading, and often deadly treatment that Zamperini and his fellow POWs received at the hands of their Japanese guards has been detailed before, including in the brilliant book about the Bataan Death March, Tears in the Darkness, but Hillenbrand’s genius is that her storytelling is so immediate and her details so sharp you feel the pain of the blows and the despair of the soldiers as though you are learning about their plight for the first time.

Alternating the story between Louis and Phil, and between the home front and the war effort, gives the reader a broader sense of what is happening in the war and also alleviates the constant brutality of the camps.  When the end comes and the war is over the jubilation that you feel as a reader is weighted with a need to make sense of what has occurred. Some men, Louis included, struggled for years because of the trauma of their experiences. Reading what these men went through in order to survive an enemy bent on their total destruction made me understand why they truly were the Greatest Generation.

Louis Zamperini’s life was exceptional and Laura Hillenbrand has written a wonderful book that uses his life to tell the story of the war and the life-saving power of family, camaraderie, hope, and dignity, and, as she did in Seabiscuit, of the undaunted courage and determination it takes to be a champion. 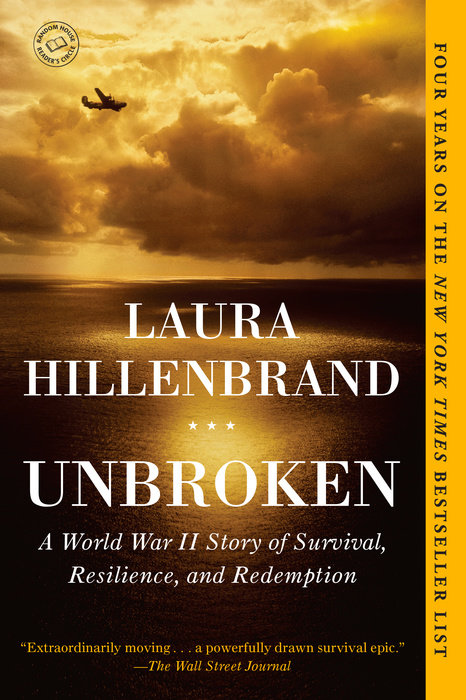 In boyhood, Louis Zamperini was an incorrigible delinquent. As a teenager, he channeled his defiance into running, discovering a prodigious talent that had carried him to the Berlin Olympics. But when World War II began, the athlete became an airman, embarking on a journey that led to a doomed flight on a May afternoon in 1943. When his Army Air Forces bomber crashed into the Pacific Ocean, against all odds, Zamperini survived, adrift on a foundering life raft. Ahead of Zamperini lay thousands of miles of open ocean, leaping sharks, thirst and starvation, enemy aircraft, and, beyond, a trial even greater.

14 Monumental Books to Read on the Anniversary of Pearl Harbor