Louisa Hall will surprise you with her eclectic life. She grew up outside Philadelphia, graduated from Harvard, and she played squash professionally and was ranked #2 in the country. These days, she teaches creative writing at the University of Texas at Austin. Her first novel, The Carriage House, was recently published. We knew she loved Jane Austen books, so we asked who her favorite characters are. True to form, she surprised us with her response:

When I first read Jane Austen’s novels in high school, I was enthralled by the whole set of tart, intelligent heroines who manage to fall in love while criticizing not only their future husbands but every other aspect of the society into which they were born. The only Austen heroine I couldn’t bring myself to adore was Anne Elliot in Persuasion. She had none of the lively scrutiny of Lizzy Bennett, none of the sparkling wit of Emma Woodhouse. She was deflated and sad. At twenty-eight, she seemed old. She mocked no one, not even her vain father or her spoiled sisters, no matter how dismissively they treated her. Flush with the confidence that only a teenager who has experienced nothing of the world can possibly muster, I wished that Anne would put up more of a fight.

When I re-read Persuasion while floundering in graduate school, I had somehow become as old as Anne, and this time, my reaction to her was different. I realized that Persuasion is about a young woman who’s forgotten how to be her previous self. When Anne was younger, she was vibrant and intelligent; there was no reason for anyone to suspect that she wouldn’t succeed. When the reader meets her, however, she has changed. She can barely remember how she used to carry herself. It’s as if she’s entered a different, bleaker reality from which she can’t find her way home.

The feeling that Anne is just outside herself, struggling to find a way back inside, is not only a result of the novel’s plot, but also a product of the narrative voice that Austen applies to her heroine. Throughout her novels, while remaining in third person, Austen brilliantly slides from inside her characters’ heads to positions quite far away. When she is close to Anne’s conceited father, for instance, we perceive the world as a constant assault upon Sir Walter Elliot’s well-deserved self-esteem. When she is farther away, we understand that his self-esteem is in fact a pathological level of misguided confidence. In Sir Walter’s case, this sliding perspective allows us to chuckle from a safe distance.

Because Anne is neither vain nor self-absorbed, but is in fact painfully self-aware, the same narrative strategy of moving closer and then farther away serves a slightly different purpose: rather than sharpening the satire, it mimics Anne’s own self-conscious mindset. To varying degrees, we all know what it is like to experience the world directly, and then instantly switch gears into critical observation of the same experience. We feel embarrassment, then imagine ourselves foolishly blushing and, as a result, feel intensified embarrassment. That movement, from direct perception to third-person narration of one’s own perception, is what constitutes self-consciousness. More than Lizzy Bennett and Emma Woodhouse, Anne Elliot has spent time away from herself, narrating her own flawed responses, measuring her own decline. Her voice no longer originates inside of herself; instead, it comes from a place slightly apart, from which she can watch herself failing.

A psychologist friend once told me that she advises her patients to strive to be the narrators of their own stories. What she meant was that we should aim to be first-person narrators, experiencing the world directly from inside our own bodies. More commonly, however, we tend to be third-person narrators, commenting upon our own cleverness or our own stupidity from a place somewhat apart. Austen’s narration of Anne—a third person that sometimes approaches first person, then swings out to the distant echelons of narration once again—perfectly captures the feeling of wanting, but failing, to exist inside one’s own body.

This painful trick of narration might explain why I found myself allergic to Anne Elliot when I was a confident kid of sixteen. If it’s single-minded clarity that you want, Lizzy Bennett and Emma Woodhouse have much more to offer: those young women are not so self-conscious that their narration feels like a product of their internal divide. If, however, you’re in search of a character who has stumbled out of her own story, Anne Elliot is the more persuasive narrative voice. Unlike Lizzy Bennett and Emma Woodhouse, who can tease the society they live in because they are still ascendant within its boundaries, Anne Elliot observes her world from a place that is truly outside it. If she doesn’t mock society, it’s because she has fallen too far from its comforts to take pleasure in such laughter. From outside the house of her youth and outside the first-person singular voice, Anne spends her quiet hours peering in windows, hoping to catch a glimpse of the happy first person she once was. The intelligence that comes from such lonely observation belongs only to Anne, and though it may not glitter like the keen wit of happier heroines, it can offer a unique kind of comfort to those of us who have also wandered a little outside our first lives, who have become the second or even third person in our own stories. 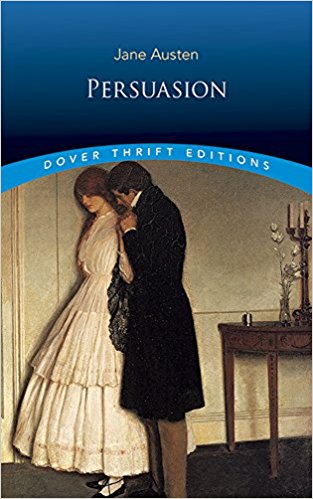