I’ve always thought that some of the highest praise you can give a novel is to call it original. Up Jumps the Devil is completely original, not to mention madcap, imaginative, and hilarious. It belongs on the shelf next to Chuck Palahniuk, Christopher Moore, and Carl Hiaasen (to name a few), and its heart is so obvious on every page that by the end you want nothing more than to clap author Mike Poore on the back and sit down with him over drinks.

In this novel’s world, the Devil (née Lucifer, and now calling himself John Scratch when he’s in human form) has adopted America as his “pet nation” billions of years after being expelled from heaven, and while mourning Arden, the angel whom he loves and who’s reluctant to abandon celestial safety. On earth, his altruistic philosophy evolves as a response to the way God commandeered the creation process: “If anything, the Devil seemed to think that the world should do what came naturally, that everything natural was just fine, and that questions of Good and Evil were silly. He did what he did to help a better future come faster.”

Over the millennia, from ancient Rome to Woodstock, the Devil quite literally sees it all. He’s there when Ben Franklin invents electricity, when George Washington beats back the British at Trenton, when Nat Turner rises up in rebellion. He becomes one with JFK during the Cuban missile crisis and his assassination, he’s caught in the battle of Gettysburg, and he’s there in Hiroshima when the atomic bomb detonates. These are my favorite parts of the book (and let’s not forget his encounters with Jesus and Pocahontas). But it’s not until John Scratch befriends three 1960s bandmates who sell him their souls in exchange for fame and wealth that he begins to undergo his most trying, humanlike temptations. The musicians’ bargain frames the rest of the story, which evolves into a brilliant critique of our overzealous, war-obsessed, notoriety-hungry culture.

While the Devil can unleash mischief and turn himself—and anyone else—into any physical form imaginable, Mike Poore’s vision is really of an essential rebel who brings out the naughtier angels of our nature (for the better). “The world without the Devil,” he writes, “was a world without certain kinds of fun. The kind you keep to yourself, like if women’s shoes excite you or you like to eat dirt. It would be a world where the urges were shallow and sleepy, where you wanted to go to Mars less, wanted to get in shape less, wanted to do it doggie-style less.” In other words, a world that’s boring as hell.

Up Jumps the Devil: A Novel
by Michael Poore 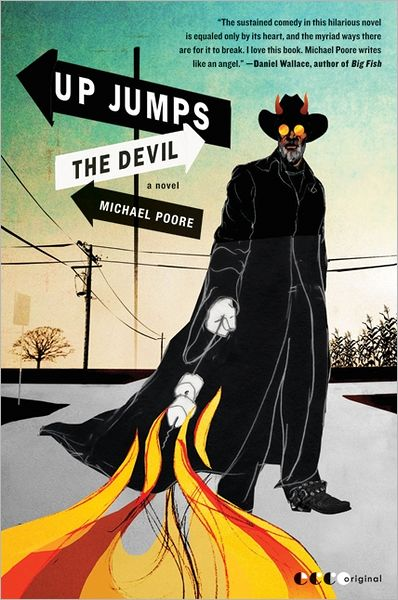 |+| Add to Your Shelf
Up Jumps the Devil: A Novel
Michael Poore