Joni Evans’ 35-plus year career in publishing includes serving as President and Publisher of Simon & Schuster, and Publisher at Random House. Most recently she was Senior VP of the William Morris Agency’s literary department, where she repped such bestselling authors as Marcus Buckingham, Ann Coulter, Fannie Flagg, Quincy Jones, Mary Wells Lawrence, Peggy Noonan, Martin Garbus, James Patterson, Liz Smith and John Stossel.  She is a founding member and CEO of wowowow.com (The Women on the Web), a free, daily internet website by, for, and about women. She has written for the New York Times, The Washington Post, Vanity Fair, New York and O.

Full disclosure: I was Candice Bergen’s publisher back when Knock Wood was originally released thirty years ago. Back then, Candy, my editor (the late Marjorie Williams), and I would meet at her glamorous New York City apartment, a duplex with a two-story window overlooking Central Park, for weekly editorial sessions. We were trying to drag the book out of Candy—she was reluctant to expose too much. Her mother was very much alive, and her conservative father’s ghost felt like a fourth presence in the room. Candy seemed to feel an extra responsibility not to offend.

But the final product, Knock Wood (a title Candy miraculously came up with in reference to her “brother,” Charlie McCarthy, the famous dummy that made the Bergens a famous family) was so good that it soared onto the New York Times bestseller list and stayed and stayed. She had somehow told the truth: self-deprecatingly, of course, but in the end she was brave and unflinchingly honest about everything.

If you haven’t read this biography yet (you fool!), grab it now. A new book by Candy, A Fine Romance, is being published next spring so, just like you need to watch every episode of Breaking Bad, House of Cards, etc., you’ll want to have read the this first chapter in Candice’s life before moving forward to her new book.

The tale here is funny, crisp, and biting: Candy describes everything: her absurdly opulent Hollywood childhood (Liza Minelli’s birthday parties stage-directed by her choreographer dad; Charlton Heston playing Santa Claus, etc.), her fame enhanced by her early sophisticated looks, which made her a target for unusual men (a star, twice her age, who tries to sexually attack her), her escape to a boarding school in Switzerland where she seized upon photography as a career, her increasing ease in playing different parts, and her alarming beauty (“Looks might enhance your sense of entitlement, but they do nothing to build your confidence in your ability to rule the realm”). She is smart enough to know that being a beautiful semi-celebrity leads to nothing but chaos . . . and lucky enough before that happens to her, to be saved. Ironically, she is saved by the very thing she had been running away from: Hollywood. For her first role Candy is thrust into what she had hoped was a small art film but turned out to be The Group. She recounts her acting career hilariously, with insights into Steve McQueen, Yves Montand, and so many more.

Once she finds her true medium—humor—and starts to gain fame (Carnal Knowledge, Starting Over, Rich and Famous), she then must face the painful irony of seeing her father’s career slide as hers begins to rise.

There is much more to this “engaging, intelligent and wittingly self-deprecating autobiography”—as the New York Times review by Gina Mallet called it than I can include in a review. Now, with a beautiful daughter and charming husband and outrageous dog, Candice seems to live life as she chooses—fully, as an accomplished actress and a graceful writer. Her new book will tell us everything Candy’s has been doing since Knock Wood and I can’t wait to read it but I am so glad I got a chance to read Knock Wood again, because I’d forgotten how much I loved it! 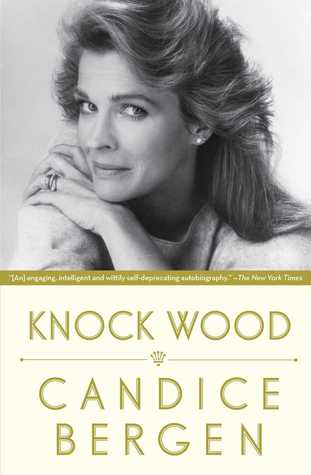