I started reading Animals in Translation by Temple Grandin a while ago, but stepped away from it halfway through. Not because I became distracted with a new book (usually the case), but because my five-year-old French bulldog, Gus, died unexpectedly. Late one Saturday afternoon, he suddenly lost control of the left side of his body and deteriorated in a matter of minutes. I rushed to the emergency vet hospital and in the morning Gus was to get a full neurological workup. That night I left and said good-bye to him. He lifted his little head but was too weak to even get up, although he made his best effort. It was the last time I would see him. Anyone who has had to put a pet down knows the heart-wrenching experience it is. In the coming days, I had no desire to read anything or look at anything about animals, whether on paper, TV, or in real life.

Weeks later, I returned to Animals in Translation. Fortuitous, since a large part of the book addresses the connection humans have with animals and why it’s important. I wanted to get back to the book because I am an animal fanatic and had been enjoying the countless demonstrations of animal intelligence within the book. It makes sense that so many of us have such a love of animals. They have been at our sides for hundreds of thousands of years. As Temple Grandin points out, we have co-evolved with our canine companions. Certain areas in both canine and human brain centers have grown or shrunk depending on the tasks we have taken over for each other.

You may recognize the name Temple Grandin from the 2010 award-winning HBO film featuring Claire Danes. The film received heaps of accolades and cleaned up with multiple Emmys, Golden Globes, and SAG Awards. The film follows Temple’s story as she is diagnosed with autism in 1949 at the age of two. Her mother was dedicated to providing her with extensive therapy and access to the best education offered. She persevered despite many challenges and became a doctor of animal science, a professor at Colorado State University, a bestselling author, and an autism activist. Her work in the meatpacking industry completely changed the way we slaughter and process livestock (humanely). When asked how she can work in this industry, her response is that these animals exist only because humans bred them into this world and we owe them a low-stress and respectable life while they are here for a just a short time on this planet.

Odd stories throughout the book demonstrate the importance of socializing our animals and breeding them responsibly. Fear kitties, rapist roosters, and psycho hens prove her points. Grandin continuously stresses how important it is to give animals the respect they deserve as well as give them credit for just how intelligent they are. We’ve all heard of monkeys using tools and, in fact, one evening while I was doing laundry down the hall from my apartment, my dog, Gus, used an elevator to go see the treat-toting doorman. One moment he had been patiently watching me shove clothes in the washer, the next moment gone. When I got downstairs I found him exactly where I thought he would be—with the doorman, eating Milk-Bones. I still have no idea how he managed to get on the elevator and down to the lobby.

Another rich layer of the book addresses the autistic brain and helps the reader to understand the sensitivities of autistic people. I recommend this book to anyone who has friends or family affected by autism. Statistically speaking, these days that is most of us. This book opened my eyes to how autistic people process the world around them. I have a new empathy and understanding of the world they live in.

Animals in Translation is a fine exploration of how animals have evolved, how they’ve thrived despite human intervention, and how they think. The matter-of-fact voice Temple writes in is charming and quirky. Ms. Grandin’s work is worthy of a Nobel Peace Prize. She has made critical strides in the meatpacking, livestock, and animal husbandry industries. She’s helped us to understand what it means to be human in the context of animals, what it’s like to be autistic, and what it means to be a compassionate, kind living being amongst other living beings—fur or no fur.

Animals In Translation: Using the Mysteries of Autism To Decode Animal Behavior
by Temple Grandin 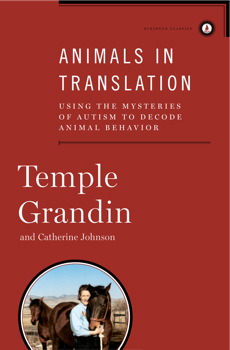 |+| Add to Your Shelf
Animals In Translation: Using the Mysteries of Autism To Decode Animal Behavior
Temple Grandin