The first time I read Judy Blume’s classic Are You There God? It’s Me, Margaret, I was Margaret’s age but in a higher grade and younger than everyone else in my class (all of whom were already teenagers and ‘over’ pre-teen issues). Re-reading it as an adult reminded me about being young and growing up in a society similar to, yet fundamentally different from, Margaret’s tensioned life.

There is always a wonderful sense of solitude that accompanies our memories of adolescence. We recollect our experiences from an intensely young point of view; the friends we made, the books we read, and the fun we had generally overshadows any memories of adults. The first time I read Margaret’s tale, I was wholly engrossed in her life from her perspective: her struggles over which religion to choose (which seemed to me like an Americanism, similar to wearing casual clothing instead of crisp uniforms with polished black shoes and bleached white socks to school every day), her anxiety over boys (parallel to my anxiety over failing exams, or — ever so slightly worse — not being considered ‘cool’), and teachers who appreciated practical jokes (if my class tried turning in tests without names like Margaret’s did, we’d probably all have promptly received failing grades and then be punished in some inventive manner).

Yet as an adult, I wonder about the other adults in Margaret’s life: the shadowy maids who exist at the far ends of Margaret’s consciousness and are never quite humanized, the teacher who remains one step ahead of all practical jokes, and Margaret’s parents whose subtle disagreements and worldviews influence and confuse her to such large extents. Do they eventually sort out their lives? At what stage does the lesson Margaret learns, about not judging others who are different from her, spill over to acknowledging the humanity of everyone around her, including maids and kitchen women? In spite of all this, Margaret’s honesty reflects a mature, anxious, confused, and excited young woman, and Blume leaves us with the sense that Margaret will eventually figure these things out, just like many of us did.

Are You There God? It’s Me, Margaret is a gem of a book that offers insights even when reading a decade later. Margaret’s tale is frank and genuine and utterly relatable, whether you grew up in a cramped New York apartment or a quiet Nigerian suburb.

Are You There God? It's Me, Margaret.
by Judy Blume 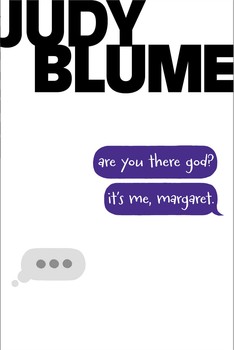 |+| Add to Your Shelf
Are You There God? It's Me, Margaret.
Judy Blume

Judy Blume’s Coolest Book (alright, ONE of them)

Are You There, Cover Art Gods? It’s Me, Publishing.