Seated behind the familiar wheel of my mother’s clunky, beat-up, forest-green Volkswagen, I turned the key in the ignition and grimaced in sleepy annoyance at the unexpectedly loud volume of her radio presets. Still blinking the sleep from my eyes, I desperately poked at the dashboard display in an effort to silence the blaring brass melody of National Public Radio’s timeless closing jingle. After inadvertently turning on my seat heater, accidentally defrosting the rear windshield, and breaking the nail on my right index finger, I finally laid hold of the volume control knob. Marveling at my mother’s apparent inability to hear, I brought the numerical volume from twenty-seven to nine and settled in to continue listening during my brief drive from our suburban neighborhood into Seattle.

I had tuned in at a peculiar moment: the regular Saturday morning programming had been canceled and its time slot repurposed toward honoring a recently deceased NPR program writer. Author David Rakoff, as my initially ignorant ears quickly gleaned from the memorial newscast, had passed away just a few days prior, leaving behind a rich and humorous literary legacy.

The drone of biographical information, however, proved uninteresting to me; I remained tired and inattentive through the first two commercial breaks. It was not until Rakoff’s own previously recorded voice began reading an excerpt from his bestselling collection of essays Half Empty that my jaw dropped in utter astonishment.

Rakoff read for sixty seconds about a conversation between him and his therapist. The basic subject matter was unimportant, the setting was simple, but Rakoff’s artful use of descriptive language transported me to the most intimate part of his psyche. Driving through the grey gloom of the Seattle springtime, I couldn’t help but shed a tear as this man, whose work I had never laid eyes on, articulated thoughts about personality and perception that I had been subconsciously attempting to verbalize for the better part of a decade.

Upon my return home that evening, I scrambled to conduct further research, desperate to learn more about the shrewd and prophetic voice on the radio. Upon procuring a copy of Half Empty the next morning, I devoured all 224 pages in the course of one evening. Each chapter shed profoundly quirky and jarringly accurate insight on everything from the creative process to Y2K.

Rakoff’s prose has the power to move readers to action, self-reflection, laughter, and in my case, tears of relief. Relief that someone else had said what I had been trying to say. Half Empty is writing as art in a most refreshing form.

Half Empty
by David Rakoff 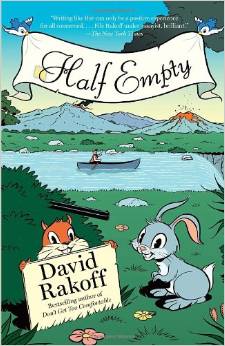 |+| Add to Your Shelf
Half Empty
David Rakoff