Brando Skyhorse’s debut novel, The Madonnas of Echo Park, paints a vivid picture of L.A.’s Echo Park through intricately-crafted stories of men and women who struggle to lose their ethnic identity in pursuit of the American dream. It received the 2011 PEN/Hemingway Award and the Sue Kaufman Award for First Fiction from the American Academy of Arts and Letters. In his new memoir, Take This Man, released yesterday, Brando once again evokes the spirit of his childhood neighborhood, but this time through the lens of his own life. Off the Shelf asked him to talk about what it’s like to mine real life for both fiction and memoir.

I’ve written two books, both set in Echo Park, California, the neighborhood where I was born and raised. The first, The Madonnas of Echo Park, was a novel and it’s natural that people assume first novels are autobiographical. For the most part, mine isn’t. There are three reasons for this. One, I wrote a bad autobiographical novel in my early twenties called – wait for it – Echo Park. What made it bad was how autobiographical it was. Two, I knew I’d write about my family at some point and I didn’t want to write (or have people pay for) the same book twice. Three, I wanted to create an Echo Park that felt both as gritty and fantastical as it did to me growing up. To capture those feelings I had to push my own experiences aside and let my fictional creations have their own say.

Madonnas has nine different storytellers in it, each with their own chapter, along with a cast of minor characters. It’s a full book with a thriving population that seems to grow each time I reopen it. All these people needed things to say and do so I drew from my family’s voices, perspectives and sometimes their experiences, to give each of my characters the fuel they needed to live on the page.

“The Hustler,” for example, was inspired by my second stepfather Robert, an ex-con who several years after he left our family, returned to Echo Park for maybe twenty-four hours. Efren, the bus driver in “Rules of the Road,” shares my stepfather Frank’s discipline about personal responsibility. We were stopped at a red light once behind another car. The light turned green. Frank waited maybe a second before blowing his horn. I asked what the rush was. “We have somewhere to get to,” Frank told me, “and he should be paying better attention to the road. I’m helping him be a better driver.”

The Coat Queen in “Our Lady of the Lost Angels” is in part inspired by my grandmother’s stories about her own mother who lived in Los Angeles in the 1920s and 1930s, and a woman that roamed Echo Park dressed in a long overcoat, Jackie O sunglasses, and a dirty white turban. Late one night she banged on our front door – well, our front security gate – claiming she was “the police.” The police were called (but never came) so my grandmother led her down our staircase with kindness back to her own home. Ofelia, the mother of the narrator, Juan, in “Yo Soy El Army”, is a minor character in the book. She appears on no more than a couple pages but you could draw a straight line between her bluster and the excellent lines she has in the text right to my mother.

You don’t need to know where every one of these intersections between real life and fiction is in Madonnas to enjoy it. Fiction loses some of its mystery when its decoded and all of it when its explained. I like it better when fiction does the explaining on its own. So I turn both books over to you. Read Madonnas alongside Take This Man and think of them as two sheets of paper with different patterns of punched holes. Hold them up to the sun together. Does the light shine through in places that even I can’t see? Maybe I’m mistaken about whether the book isn’t autobiographical. To paraphrase a line from Madonnas, fiction makes a great accomplice to real life. I know my mother would agree. 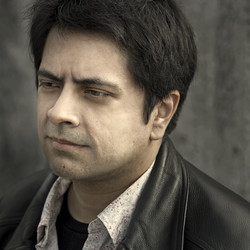 |+| Add to Your Shelf
Brando Skyhorse