When I first read Band of Brothers it was because I had just watched the brilliant HBO miniseries and I wanted to read the book to see what they had left out, as films and TV always leave something out. Stephen Spielberg and Tom Hanks did a good job of including all the big showy parts, the jumps and battles, the firefights and devastation, but in the huge production they lost the nuance of setting and character that you can only get from reading the book.

Three of my uncles fought in the war, one in Europe and two in the Pacific. My Uncle Neumann landed on D-day but I didn’t realize what that meant until it was too late to ask him. When I read this book I was awed, amazed, and proud of what he and my Uncles John and Bill had done.

Stephen Ambrose’s genius is that he uses the stories of the individual soldiers to tell the collective story of Easy Company. And even though it is clear he sees them as such, the men never think of themselves as heroes. They were a group of comrades who worked together to win a war, battle by battle, so they could survive and go home. The only heroes they ever acknowledge are the ones who fought beside them.

Ambrose’s spare, spot-on writing makes this a full yet surprisingly easy read, especially if you are not a natural reader of war chronicles. Once I picked it up I could not put it down and when I finished I had a much better understanding of some of the major battles of the war and what these men had to go through to fight, win and survive them.

From the extreme early training in boot camp—at the hands of the despised Captain Sobel—that most likely saved many of their lives, to the chaos of the jump into combat on D-day when many of them lost guns, leg bags, and their direction; from the intense combat of Operation Market Garden and the liberation of Eindhoven to the frozen terror of Bastogne; and finally the celebration at the end of the war in Europe and their liberation of Hitler’s Eagle’s Nest: Ambrose expertly weaves historical details with the soldiers’ own descriptions to create such a full story that you feel you are right beside Major Winters, Captains Spiers and Nixon, Lieutenants Lipton and Malarky, and Sergeant Guarnere and the other soldiers of Easy Company.

The men recount moments of terror and humor, quotidian details about food and foot care, examples of true leadership and deadly Army bureaucracy, a constant mix of boredom, loss, courage, and survival, but the one theme throughout this book is that these were men who had bonded in the crucible of war and were fighting not just for their country but for each other. This is a wonderful book about courage, friendship, and tenacity in the face of sometimes overwhelming odds and it is the detail in Ambrose’s writing that brings the story to life in a very personal way that is not possible in an epic tv series, no matter how good it is. 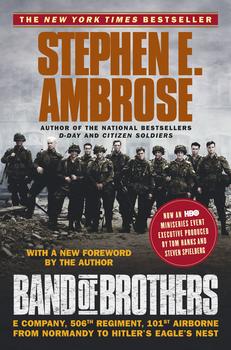 From landing on D-Day to capturing Hitler's Eagle's Nest, the riveting story of the citizen soldiers of Easy Company and the battles they fought to liberate Europe. When you read this book you understand why the men and woman who served in World War II deserved to be called, "The Greatest Generation."

We Stand Alone Together: The Brilliant Tale of Easy Company