Like most girls, I read Anne Frank’s The Diary of a Young Girl when I was in school. Borrowed often from our library, the book was well worn by the many readers who had loved it before me, but when I read that book I felt like Anne was confiding directly to me. I was with her as she detailed the quotidian drama of her life in the attic, her struggles, hopes, frustrations, and dreams. I was thirteen when I read the book for the last time. The characters I remembered were the people who lived with Anne—her mother and father, Margot and Peter, the Van Daans and Mr. Dussel—not the ones in the office below who were intricately involved in her survival.

Miep Gies, who I honestly did not remember from the diary, worked for Mr. Frank and is one of the people from the office who sometimes came upstairs to visit and deliver food or who knocked on the door to alert them of danger or to give them the all-clear when the danger had passed. Anne mentions her several times but to my thirteen year old self her part seemed almost small compared to the dramas in the attic.

The beauty of Anne Frank Remembered is that Miep tells the other side of Anne’s story—the grown-up side—and gives you greater insight into the reality of life in the attic as well as the world beyond the attic.

Miep’s straightforward narrative is a lovely counterweight to Anne’s teenage romanticism. As horrific and terrifying as it was for the Franks to be sequestered in the Annex, always waiting, Miep, her husband, and the other workers who knew the Franks were behind the bookcase also had to deal with a daily horror and fear: of not finding enough food to feed everyone, of being discovered harboring Jews, of being killed by the fighting that raged after D-Day, of watching their neighbors disappear overnight.

Miep starts the story with her own. Although she becomes a Dutch citizen when she marries Henk, she was born in Austria and is sent to live in Holland as a child when her parents can’t afford to feed her after WWI. She thrives in the happy, ordered home of her adopted family and decides to never leave Amsterdam.

The story that most people will want to read is the one of the title: How Miep met and what she thought of the Franks, especially Anne. Miep remembers so many wonderful details—how she got her job by making jam in the kitchens of Otto Frank’s import company; how happy Otto was when his family finally joined him, hoping at last they were safe; the wonderful meals and parties; how beautiful the girls were; the slowly tightening noose of Nazism; the decision to go into hiding; and finding the scattered pages of Anne’s diary and saving them after the Franks were taken.

The best parts are when she tells a fuller story of something Anne relates in her diary, like the day Miep helped get Margot to the Annex. The two leave the Franks’ flat ahead of the family. They are wearing many layers of clothing  because they cannot be seen with suitcases and they are riding forbidden bikes in a driving rain –Margot not wearing her star – terrified at every corner that they will be stopped and arrested. Miep’s descriptions of daily life in and out of the Annex that Anne never mentions make the situation the Franks were living in vividly real.From the high moments to the low, she is a reliable narrator, and gives details from the other side of the bookcase that fill in some gaps in Anne’s story.

But she also tells the story of living in occupied Amsterdam: the many kindnesses shown by strangers (the butcher and grocer know she is hiding people but never ask, only make sure to give her something extra when she shops); the daily fears of living in an occupied war zone; Nazi sympathizers who try to recruit her; her husband’s dangerous work for the Resistance; the constant search for enough food; and the daily heartbreak of watching people be carted away to the camps and not being able to stop it.

Miep and her husband hid another person in their apartment and knew of others in hiding in the countryside. What she did for the Franks was what many Dutch people were doing everywhere and she never thought of herself as doing anything heroic. When she describes the end of the war and the families who have been in hiding for years coming out into the sunlight, emaciated, pale and blinking but alive your heart breaks for the senseless loss of the Franks and all those who died in the camps.

Miep’s story of a woman who chose to risk her life to save others is brilliant on its own, but when one of those people was Anne Frank, this book becomes indispensible. 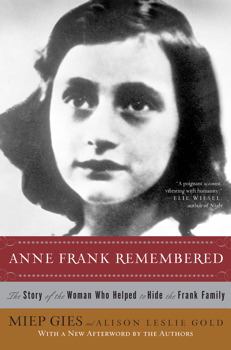 For more than two years, Miep Gies and her husband helped hide the Anne Frank and her family from the Nazis. From her own remarkable childhood as a World War I refugee to the moment she places a small, red-orange, checkered diary -- Anne's legacy -- in Otto Frank's hands, Miep Gies remembers her days with simple honesty and shattering clarity. Each page rings with courage and heartbreaking beauty.

Herstory: Women Who Left a Mark Through History