Every generation has its urban legends. For me, this meant that an unknown classmate found spider eggs in her pack of Bubble Yum gum; Mikey from the Life cereal commercial died from drinking a can of Coke while eating a bag of Pop Rocks; and someone’s brother discovered—upon biting into it—a razor blade hidden inside the apple he’d collected with his Halloween loot.

Perhaps the most embellished urban legend I’ve heard is the tale of Homer and Langley Collyer, eccentric elderly brothers who died twelve days apart in their once grand Harlem brownstone. Their electricity and water had long been shut off for nonpayment, despite their having the money to pay their bills. Langley foraged in trash cans, under the darkness of night, for their meals. The windows of their home were always shuttered, and their apartment was stacked floor to ceiling, and then some, with collected items as varied as decades of old newspapers, a dismantled Model T, rinds of hundreds of oranges, and pickled organs in jars. All three floors were rigged into elaborate, labyrinthine booby traps. There was so much stuff everywhere that Langley’s body wasn’t discovered until a month after his death. While crawling through a tunnel of their belongings to bring food to his bedridden and blind elder brother Homer, Langley was crushed when he triggered an avalanche. Homer then starved to death, just ten feet away from his dead brother.

Homer & Langley by E. L. Doctorow is a reimagining of this very real and macabre true story of New York City’s most infamous hoarders, told from the perspective of Homer, who, in this novel, is depicted as the younger instead of the elder brother. The Collyers were born in the late 1800s and died in March of 1947, but Doctorow times the narrative in a later era, allowing him creative license to incorporate historical details such as the Vietnam War and the brothers’ experience with befriending and loving hippies into their life narrative.

Although much is known about the mess the Collyer brothers left behind (many jaw-dropping photos were part of the journalistic sensationalism that surrounded their later years and their deaths), little is known about the reasons their lives turned out the way they did. Doctorow does a brilliant job of trying to answer that question, and his story rings with truth and poignancy, sparks of humor and many moments of warmth. There are also many moments that can make you cringe. Don’t be surprised if you’re suddenly taken with the urge to clean out a closet or unsubscribe from daily delivery of The New York Times.

Fans of the TV series Hoarders, as well as fans of the series Frasier, will find lots to love in this beautifully disturbing novel. Doctorow’s deeply bonded, well-spoken, highbrow Collyer brothers beg comparison to those other tightly knit fictional brothers, Frasier and Niles Crane. Even Martin, the Cranes’ TV father, referenced the similarities (The Dinner Party, Season 6, Episode 17). Doctorow’s well-imagined retelling of the Collyer brothers’ lives and demise could easily have been a demented flashback episode of Frasier.

In my head, I read the entire book in the voice of Niles Crane, and it was a hoot. But, at the end, my heart paused, and my eyes teared up for the Collyers. 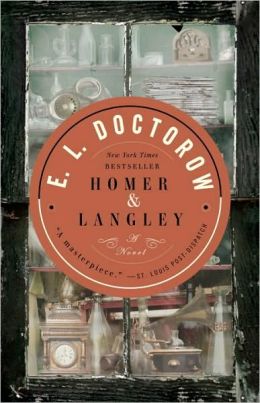 |+| Add to Your Shelf
Homer & Langley: A Novel
E.L. Doctorow

Homer and Langley Collyer are well-spoken, well-educated brothers—one blind and deeply intuitive, the other damaged into madness, or perhaps greatness, by mustard gas in the Great War. They live as recluses in their family's once grand Fifth Avenue Harlem mansion, scavenging the city streets to add to their collections, and filling their rooms floor-to-ceiling with everything from decades worth of newspapers, to a dismantled Model T. This beautifully disturbing, fictionalized novel of the lives and deaths of New York City's most infamous real life hoarders goes deep to try and explain what may have transpired to make the brothers live as they did.