It is vacation season, when we all pile in to cars, trains, and airplanes hoping to escape for a week or two the reality of who we are and where we live. We pack with such high expectations: that we will not hit any traffic on the road, and that at the airport we will check in with no hidden fees or angst and glide effortlessly to our gate, where we will board our plane and arrive early and refreshed.

My trips to airports are never effortless but I have rarely had a trip that demanded a multipage letter to the airline responsible for a horrendous journey. But then I have never been trapped in the no exit hell of O’Hare instead of on my way to California to attend the wedding of the daughter I last saw when she was an infant and her mother left me.

Dear American Airlines by Jonathan Miles starts out wickedly funny as our frustrated flier, Benjamin Ford, composes his letter to American Airlines explaining his situation and demanding 1) to be gotten to California immediately, and 2) a full refund of his $392.68 fare. But as the day wears into night the letter evolves from a tirade into a life story and we find out who Ben Ford is and how he has come to be stranded.

Ben is an ex-poet who now translates Polish literature for a living, and if that doesn’t tell you almost everything you need to know about him you also find out he is the only child of a steady, kind Polish War survivor who just wanted to live an easy life but instead married a certifiable Southern Belle, a cross between Blanche Dubois and the matriarch from Prince of Tides, who spent a fair share of Ben’s childhood in the mental ward of the local hospital. He is also, and I give nothing away here, someone who drinks, which he does quite a bit throughout his story.

When you first pick up this book, the pages look dense, run together, long paragraph on top of long paragraph, and it seems daunting until you start to read and realize those long paragraphs are exactly the way one would write a letter over the twenty hours spent stranded in an airplane terminal. Ben tells you everything: who he chats with a during each cigarette break, how his parents met, why Sylvia left him. Miles is such a beautiful writer and Ben’s story leads so smoothly from one topic to the next that you are not aware that sometimes you have stopped breathing, so enraptured are you, until Ben pulls himself back, realizing how far from his original topic he has strayed and you come up for air with him.

Ben is not the most likeable guy but he is definitely honest, and such a raconteur with his unhappy story that you can’t help but laugh even at some of his worst moments. You laugh because he wants you to laugh. It would be unbearable for him if you cried.

I read this book when it first came out in 2009 and I had forgotten how good it is. Every page has at least two lines you have to read out loud and every part of this story, as Ben reveals himself bit by bit, is a marvel. Dear American Airlines is a book you need to take with you on your next trip because this is a journey you will definitely want to take, whether or not you do curbside check-in. 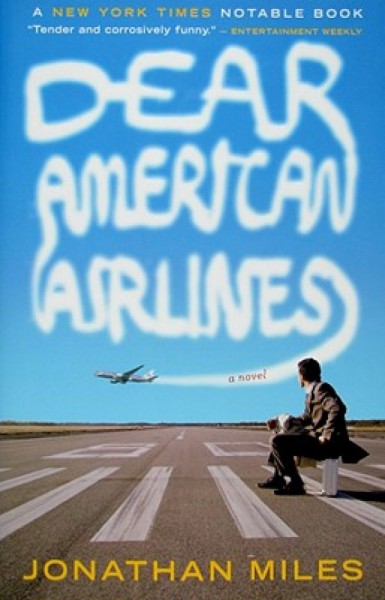 Stuck in O'Hare airport on the way to his daughter's wedding, Ben Ford is reduced to writing a letter to the airline demanding he be refunded and immediately rerouted. What starts as an outraged letter becomes an autobiography that is at turns funny, sad, overwhelming and redemptive. The language is enough to keep you entertained during several holdovers.

Funny, Sad and Satisfying: A Life Revealed In A Story Well Told