Off the Shelf was lucky enough to get a review from New York literary agent, Molly Friedrich, about a book she loves that also happens to be one she represented. “It’s true that I am Mary-Ann Tirone Smith’s literary agent, but it is also true that this book is absolutely terrific. I recommend Girls of Tender Age not to toot my own horn, but to bring this book to your attention because it is out of this world, and deserves to be read and remembered!” —Molly

Girls of Tender Age is both comic and tragic, but readers do not leave the story with a wrenched heart.They come away exhilarated.

Mary-Ann Tirone Smith’s saga of post WWII New England revolves around an ever-breeding, extended, French-Italian family struggling to climb the ladder out of the housing projects and into a productive life.Their socioeconomic status is best described by her father: Working Stiffs.

1950s Hartford is small-town America.Within one square mile of Mary-Ann’s street is her school, her church, a little branch library, a drugstore, the five-and-dime, bakery, food market, and a bustling tavern. No one locks their doors, the kids play outside after dinner till the street lights come on, and the bestselling book on everyone’s nightstand is The Power of Positive Thinking.

In the mix of family lore, food, weddings, food, funerals, food, new cousins born every year, and food is Mary-Ann’s brother Tyler, who is deemed “retarded.”When Mary-Ann’s mother tries to explain to a doctor at the famous Boston Children’s Hospital that her son can’t be retarded because he has a library of every book written on the subject of WWII and is presently in the waiting room reading Winston Churchill’s Arms and the Covenant, the doctor rolls his eyes.Mary-Ann, a consummate eavesdropper, hears her aunts’ opinion of her mother’s state often:“Florence is on the verge of a nervous breakdown ever since poor Tyler was born.”

Only when she is a college student does Mary-Ann discover that Tyler isn’t retarded—he’s autistic.He was born before the disorder was diagnosed or named.Tyler is, in fact, a savant, something she learns as an adult when her cousins call her to ask if she’s seen Rain Man.“Mary-Ann!Dustin Hoffman is Tyler!”

There is trouble coming to Mary-Ann and Tyler’s small-town American childhood, however: the sinister approach of Robert Malm. A war veteran, Malm was arrested in Groton, Connecticut, for attempting to assault a young girl.The girl’s parents don’t allow her to testify; there is no trial.He is soon arrested again for the same offense, but this time the police want him brought to justice and plant evidence to ensure his conviction. Malm is found guilty and serves a five-year sentence in a prison just outside Hartford. When he is released back into the world, he is not reformed.

Mary-Ann is in the fifth grade when this evil makes its way into her neighborhood on a starless winter’s night—the night her friend, neighbor, and classmate, Irene Fiederowitz, goes missing.The children go to school the next day, terrified and full of questions after having heard the rumors that their little friend was kidnapped.They are silenced by their teacher, but this does not prevent them from learning the news that rocks the small town: Irene has been murdered, her body found hours earlier in a yard five doors from Mary-Ann’s house. Robert Malm is arrested three days later.

The community is upended but no one speaks of Irene, in typical 1950s positive thinking fashion: If we don’t talk about it, it never happened. Thirty years later, when Mary-Ann is interviewed by the Hartford Courant, she mentions the tragedy of her missing friend for the very first time. This decision sets into motion a series of events that send Mary-Ann on a quest to discover the truth about Robert Malm and what happened all those years ago, changing her life and the lives of people in her town and family forever.

Girls of Tender Age is compassionate and vivid, heartbreaking and, at times, hilarious.Horror collides with nostalgia and the effect is at once unsettling and warm.Mary-Ann Tirone Smith’s voice is wry and elegiac, her memoir utterly absorbing.This is a life-affirming read. 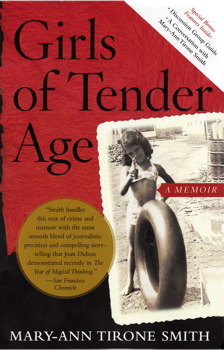 Even Literary Agents Have Their Favorite Books