I love A. J. Jacobs and his commitment to flying his freak flag, and documenting the process. From reading the entire Encyclopaedia Britannica in The Know-It-All, to his humble quest for bodily perfection in Drop Dead Healthy, to his engrossment in self-improvement in My Life as an Experiment, Jacobs’ devotion to his undertakings never waivers.

A friend who does not feel the same affection for Jacbos (sorry, A. J.!) exclaimed, “Ugh! How can you stand him? He’s so insecure, and he only writes about himself!”

“He does not,” I countered, “he writes about his curiosities and passions. I think he’s funny.”

“Well,” she replied, scrunching up her nose and making an ugly face, “I don’t.”

I’ve discovered that A. J. Jacobs is as polarizing as cilantro; people either love him and everything he writes, or they hate him, and think he tastes like soap. Of course, neither my friend nor I know him, so our judgment, love or hate, is just that, a judgment . . . and who are we to judge?

In The Year of Living Biblically, A. J. Jacobs asks himself this same question as he attempts to live his life according to a literal reading of the Bible. This means his immensely tolerant wife, Julie, is subjected to biblical laws dictating things as personal as how her husband interacts with her during her period. Yes, I just wrote a sentence for public consumption about A. J. Jacobs’s wife’s menstrual cycle (sorry, Julie!). The fact that I even read about her cycle in the first place proves my point about Julie’s level of tolerance. The fact that she sat in every chair in their household while she had her period so that Jacobs, per biblical law, would not be able to sit in any of them, proves her sense of humor.

Jacobs’s epiphany to undertake this biblical year was prompted by stories of his “ex-uncle” Gil, the most controversial member of his family and the former founder of a cult. Gil had, at one time, lived the Bible literally himself, and Jacobs travels to Israel to meet with the man who inspired his project. He also ends up herding sheep.

Along with the tenets you may have learned from watching Charlton Heston in The Ten Commandments, Jacobs explores the Good Samaritans, polygamy, the topic of Esau’s birthright, the Jefferson Bible, the Orthodox refusal to write the name of God, Creationists, snake handling, facial hair, lying, circumcision, and biblical laws governing everything from food (including a law that dictates how old a fruit tree must be before one is allowed to eat its fruit) to clothing (more laws than you might think) to animal sacrifice (oy).

I also learned that Pat Robertson, of The 700 Club fame, has a side business in age-defying protein pancakes, and that up until January of 2013, you could order DVDs of popular movies from a company called CleanFlicks that edited out anything deemed not on par with biblical teachings. I’m wondering what the movie Pulp Fiction might have looked like given this treatment.

As a sensitive preteen with no parental guidance, I was thrown out of an Orthodox Jewish temple for receiving “mixed messages” at home. Much to the rabbi’s chagrin, I’d tearfully handed him a highly detailed, bloody plastic crucifix I’d won as a prize for reaching into a clown’s apron at a Catholic church’s fair, and demanded an explanation. I’ve been terrified of clowns, and fascinated by organized religion, since. Jacobs avoided these pitfalls by assembling a board of spiritual advisors who were not afraid to answer the hard questions that arose as he navigated the minefield of interpreting the Bible’s teachings. The end result is a completely engaging and educating read.

The events in Jacob’s life that coincide with the last weeks of his biblical year give this book a circular poignancy, pulling together a topic that can’t ever truly have an ending. With his signature passion, sense of humor, immense commitment, and the willingness to put it all out there, The Year of Living Biblically is one more entry in my “Things I Love” list, right up there with cilantro.

The Year of Living Biblically
by A. J. Jacobs 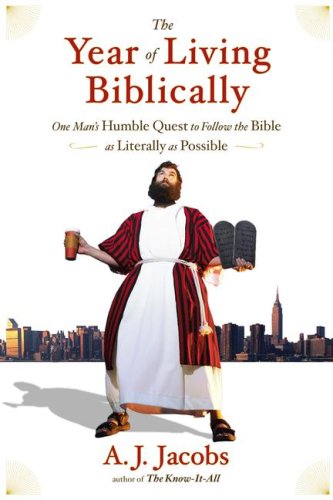 |+| Add to Your Shelf
The Year of Living Biblically
A. J. Jacobs

From the bestselling author of The Know-It-All comes a fascinating and timely exploration of religion and the Bible. A.J. Jacobs chronicles his hilarious and thoughtful year spent obeying―as literally as possible―the tenets of the Bible.

These 9 Stories of Immersive Journalism Will Broaden Your Perspective

“The loudest, rowdiest, most drunken party of my life…with several hundred Hasidic men” -A. J. Jacobs