“To Be Continued . . . ” used to terrify me. As a child, seeing those three words on TV would send me into hysterics. I thought Alex P. Keaton was actually stuck in some weird Family Ties limbo, frozen on the small screen. I simply couldn’t wait the whole week (let alone summer) to find out what happened next.

The cliffhanger makes us active participants in the drama. We have to tune in, same time next week, to release these characters. And we do, edgy and impatient for the next installment, constantly hungry for more. Without our return, there’s no resolution.

Books can be much the same. Like how we binge-watch Breaking Bad in one bleary-eyed weekend, there is a compulsive allure to the real-time fast pace of a book picking up precisely where the last one ended. I’m not immune to this phenomenon, and have blessedly conquered my fear of To Be Continued. After flying through the first four books of George R. R. Martin’s A Song of Ice and Fire, I purposefully paced myself for book five, because I knew the withdrawal would be brutal. Spoiler: It was. I need my fix.

This isn’t just a trend for adults—these series are starting younger and younger. Kids are racing through the Harry Potter, Hunger Games, and Mortal Instruments series, with a new one always ready for flight as soon as the last blockbuster dies down. We are creating generations of voracious, impatient readers, and it’s superb.

But as much as the suspense and tension can draw us into a series, there’s something to be said for the comfort of random order. The Bobbsey Twins, the Hardy Boys, Nancy Drew . . . These series separate the reader from the action just enough so that life within the series continues, even when we’re not right there reading along. We’re invested in the characters, but the plot in each book is something new and fresh. Once you’ve read one, the others can stand alone.

For my money, nowhere is this better accomplished than in the Nancy Drew books. Because while Nancy and her friends may have updated their clothing and technology since their first appearance in 1930, their names, idioms, and personalities are tried and true. Bess will always be fawning over boys. George will always be interested in sports. And Nancy will always feel guilty for skipping that date with Ned in favor of chasing down a new lead.

About two years ago, I got the opportunity to read some published Nancy Drew mysteries for work. It’s hilarious how giddy I was at the prospect: a woman in her thirties, with a degree in English literature, freaking out at the possibility of re-reading (yes, I’d already read most of them as a kid) books aimed at tweenage girls. So, by “hilarious,” I suppose I mean “pathetic.”

But the craziest part? Literally everyone I told about my trip down memory lane had the exact same reaction. One friend wanted to know if Nancy was still driving her Mustang. Another just wanted to hear the plots to some “new” (read: post-1989) mysteries. And I swear my mom had this dreamy look in her eyes as she asked, “How are things with Ned?” (I didn’t tell her about their gut-wrenching breakup in Two Points to Murder. Luckily, they were back together again by Very Deadly Yours.)

But I get it. I get why my mom loved talking to me, her grown-up daughter, about Nancy Drew, and why I am now funneling these same books to my nieces. Like reminiscing with an old friend, the best, most enduring series are those that create comfortable, relatable characters—personalities we can drop for a month, a year, two decades, and then pick up again with a brand-new book, out of order. There’s a beauty in that—an accessibility, an inclusion, that is impossible to find in the serial. Go from book one to book three in the Hunger Games series, and you may as well be reading hieroglyphics. But go from book one to book fourteen in Nancy Drew? No worries at all.

Is it canonical literature? No. But it’s an easy, relaxing escapism that we can reenter at will, and that’s not something to be diminished. The characters move timelessly with us, and whenever we’re ready to pick up the books, we can step into River Heights, into Nancy’s Mustang, push aside her backpack, and settle right back in.

The Secret of the Old Clock
by Carolyn Keene 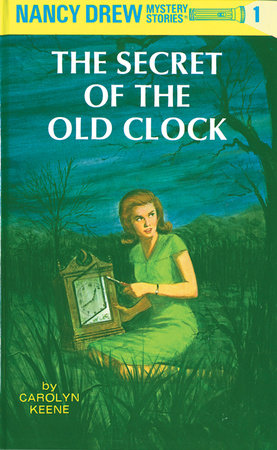 11 Authors Whose Legacies Live On

Finding My Passion for Nancy Drew at the Library

The Case for Nancy Drew