If I did not already love Bob Dylan, I definitely would have fallen for him after reading his memoir, Chronicles, Volume One. Told in a laconic, straightforward voice, it’s as personal and immediate as if you were sitting with him sharing a late-night beer in the Kettle of Fish, listening to him tell the tale of how he came to be who he is.

I am sure some people have read this book and thought that—because Dylan is notorious for bending the truth—this is not the whole story he is telling. But I took him at his word, so when he talks about being at his cousin’s frat house and hearing Joan Baez for the first time and feeling a connection that would someday come to be, or how he walked through the swamps of Brooklyn to Woody Guthrie’s house hoping to find Woody’s secret stash of unrecorded songs, I believed him and didn’t think anything was missing or unsaid.

Dylan has such an amazing way of remembering details and setting a scene—an anonymous couple running through a frozen New York night, bread pudding being made in the Van Ronks’ tiny kitchen, the quick clack of a secretary’s heels as she hurries to close a window when it rains—that it’s easy to imagine the cold snowy streets of Greenwich Village, the smoky interior of the Gaslight, the feel of the precious vinyl records that give him his first glimpse of music and musicians that will change the way he plays. He’s a great storyteller, and his recall of moments is so intricate it’s like you are watching scenes from a movie of Greenwich Village starring Bob Dylan. It’s a little trippy.

The story ranges widely and loops through time, moving from his small-town life growing up in the union-centric North Country to his early days bouncing around the Greenwich music scene to his time working with Daniel Lanois in New Orleans and touring with Tom Petty. He discreetly mentions names but never divulges secrets or gossip. He definitely loves some more than others—this is a virtual love letter to Woody Guthrie, John Hammond, and Dave Van Ronk—but the worst he ever says about anyone is that he didn’t much like them. Like the good student he is, though, he learns something from everyone he encounters and makes sure to use it. Ultimately, this is a self-portrait of an artist as a young musician, and the whole book is the story of his passion for music, all kinds of music, and how he finally learned to write his own songs. The details he shares about what he thought and felt the first time he heard Robert Johnson are worth the price of admission.

There are only a handful of excellent music autobiographies out there in the world, and this is definitely one of the best. If you think about it, many of the more recent ones owe this book and this author a huge debt for taking a standard form and reworking it till it became something unique that they could emulate. Just like his music.

Chronicles: Volume One
by Bob Dylan 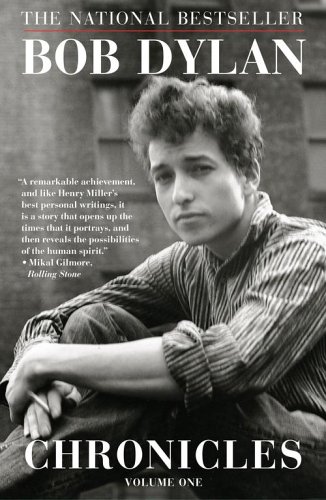 |+| Add to Your Shelf
Chronicles: Volume One
Bob Dylan

By turns revealing, poetical, passionate and witty, Chronicles: Volume One is a mesmerizing window on Bob Dylan's thoughts and influences. Dylan's voice is distinctively American: generous of spirit, engaged, fanciful and rhythmic. Utilizing his unparalleled gifts of storytelling and the exquisite expressiveness that are the hallmarks of his music, Bob Dylan turns Chronicles: Volume One into a poignant reflection on life, and the people and places that helped shape the man and the art.