Kate Mayfield was raised in a Kentucky funeral home. Her memoir, The Undertaker’s Daughter, will be published by Gallery Books in January 2015. Here she writes about great (and spooky) graveyards that have characterized some of the finest novels in history. Visit xoxafterdark for more by Kate. 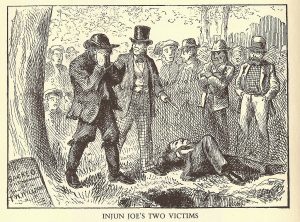 In The Adventures of Tom Sawyer by Mark Twain, two boys sneak out of bed and steal away into the midnight air in search of devils in the graveyard. What could possibly go wrong? Tom and Huck huddle behind a tree petrified as three men approach the mound of a fresh grave. Hidden from view, they watch in horror as men they recognize from town strike the grave with their shovels and begin digging up a corpse. When the job is done, one of the grave robbers demands extra payment. A fight ensues, a murder is committed, the weapon being a headstone no less, and the only witnesses to the crime flee in terror. All this in Twain’s inimitable voice.

The Victorian Graveyard that Still Exists 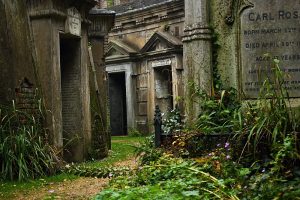 There is a London bus route that skirts the edge of the magnificent Highgate Cemetery where tombstones haphazardly protrude behind a black iron fence only hinting that the finest funerary architecture in the England lies within it. Since 1839 the famous and the unknown have been interred at Highgate and it is still open for burial. Full of Victorian Gothic tombs, mausoleums, gravestones, catacombs, chapels, home to the wildlife of a nature reserve and the remains of over 170,000 deceased, is it any wonder that an author should bestow Highgate Cemetery with the same importance as a character? In Her Fearful Symmetry, a set of American mirror twins are bequeathed an apartment in London that overlooks the cemetery.  And so the story begins…

“I knelt down by the tomb. I laid my hands, I laid my head on the broad white stone, and closed my weary eyes on the earth around, on the light above. I let her come back to me.”
Oh those Victorian authors who bind us to the pages through their intimacy with death! A much beloved novel by one of the kings of tension fiction, The Woman in White’s graveside scenes of veiled women and ghosts is an exquisite classic in every sense. 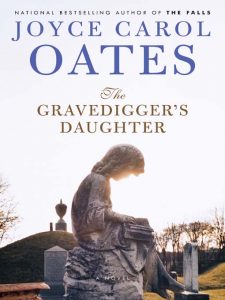 Joyce Carol Oates’s novel of violence, reinvention, and the absence of personal history begins with a scorching visceral description of the life of a reluctant gravedigger. This is a gritty novel, the grains of which settle in the mind like the dirt of a grave – not easily washed away. The story soon moves away from the cemetery in a small town south of Niagara Falls where the Schwart family live in a cottage on the grounds, but not before tragedy occurs, perpetrated by Jacob Schwart, who was forced to seek his abhorred employment after he and his family fled the Nazis in 1936. The smell of the earth where the dead are buried, the mud that is caked in the creases of his trousers, the dirt that stains the skin under his nails, and the family’s polluted drinking water, evoke a memorable tableau.

The Graveyard that Made Scrooge Cry 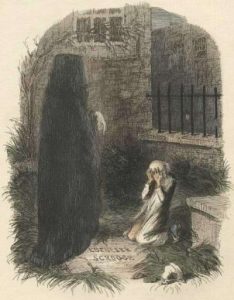 I tussled with the images of several graveyards in Charles Dickens’ stories to choose which to include here. Losing by only a narrow margin was the opening of Great Expectations wherein seven-year-old orphaned Pip stands a solitary figure in a cemetery. Get out your handkerchiefs. However, it was A Christmas Carol and its Ghost of Christmas Yet to Come with the dread and terror it visited upon our thoroughly wrung out Ebenezer Scrooge that won. Only when the ghost leads a desperate Scrooge to the graveyard and points its skeletal finger to the tombstone that bears Scrooge’s name, does the hand of redemption finally and wholly compel the man to change his ways. 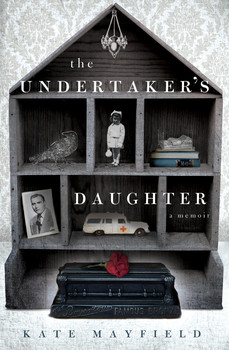 |+| Add to Your Shelf
UndertakersDaughter