When I moved into my apartment last year, my roommate already had a full bookshelf in our living room. Backed up against the wall adjacent to a luminous floor-to-ceiling window, it stands six feet tall and packed to the gills with books penned almost exclusively by women I love and admire. Joyce Carol Oates sits next to Simone de Beauvoir, Joan Didion leans against Eileen Myles, and Alice Munro is stacked on top of Virginia Woolf, Mary Gaitskill and Renata Adler.  It seems that this bookshelf exists especially for me—it conveniently contains everything I’ve meant to read over the years but haven’t—and despite my nagging publishing-person conscience, I’ve been visiting The Bookshelf instead of my local bookstore when I need something new to read. (I miss you, Greenlight, but my lease is up in August and there’s so much to get through before then.)

The Bookshelf is guiding me through an unofficial education in feminist literature, one borrowed copy at a time. Which is why I was surprised to find among the stacks last week The Price of Salt by Patricia Highsmith. I only knew Highsmith for her classic thriller, Strangers on a Train (famously adapted to film by Alfred Hitchcock) and her mystery series starring the con artist and sometimes murderer Tom Ripley. Price of Salt is a daring departure from her usual psychological suspense—it’s a 1950s love story between a young woman, Therese, and Carol, a much older suburban housewife in the midst of a divorce. An aspiring set designer in New York, Therese picks up extra work at a department store for the holidays and it’s there that she first lays eyes on Carol, who she’s instantly and irrepressibly attracted to. Post some borderline obsessive stalking on Therese’s part, the two fall in love and embark on a climactic cross-country road trip, prompting the copy on the cover to call the book THE NOVEL THAT INSPIRED NABOKOV’S LOLITA.

The Nabokov reference is a recent addition—when it was first published in 1952 under the pseudonym Claire Morgan, the book was originally billed as a “the novel of a love society forbids,” which makes it sound like a dime-store romance novel. While it is a pretty salacious read—by the time they embark on their road trip the sexual tension is practically turning the pages for you—Highsmith’s novel goes in bold and unexpected directions, and her heroines have real emotional depth. Therese is lonely and detached from her working class reality and her well-meaning boyfriend, Richard. Carol, living alone in her enormous country home, is involved in an ugly custody battle with her ex-husband. For most of the first part of the book, the two seem bored and complacent in the stretches of time between seeing each other, existing in but not quite belonging to their separate worlds. It’s when they’re together that the story really starts to take off—and they set out on the road with a detective hired by Carol’s ex-husband, hot on their trail.

The cool thing about Therese and Carol is that they never back down, not to societal pressures or oafish exes. Not even after they confront the detective and find out he has scandalizing evidence for Carol’s husband to use against her in court.  In the end (spoiler alert) they end up together, possibly the only gay novel at that time that didn’t end in suicide or reformation. The ending feels a little tacked on, like Highsmith was determined that it should end happily, but ultimately I’m glad they are together, with Highsmith behind them. These are three women who definitely belong on The Bookshelf.

The story will live on, too: the book is being made into a movie directed by Todd Haynes and starring Rooney Mara and Cate Blanchett, set to premiere in 2015.

The Price of Salt
by Patricia Highsmith 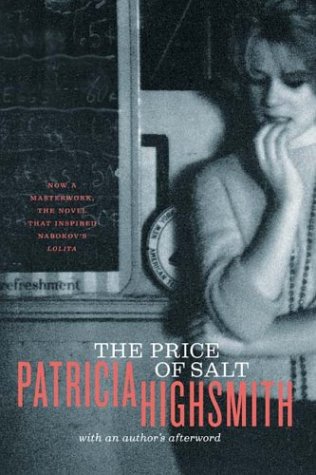 |+| Add to Your Shelf
The Price of Salt
Patricia Highsmith

More than sixty years after it was published, this groundbreaking novel is going Hollywood with Carol. Cate Blanchett and Rooney Mara are superbly cast as a pair of star-crossed lovers in 1950s New York whose relationship becomes fodder for blackmail. While the script was written fifteen years ago, the female-driven storyline struggled to find support. Skeptics were disproven when the premiere got a standing ovation at Cannes and was nominated for the Palme d’Or.

Who Doesn’t Love a Love Story?

The Novel that Inspired Nabokov’s Lolita