When I was contemplating a move to New York City to be with my boyfriend du jour, I went to Barnes & Noble, because book stores and libraries are my oracles. When I saw it on the shelf, I was inspired to take a closer look at the red brick tenement on the cover of Joseph Mitchell’s Up in the Old Hotel, a thick omnibus collection of decades of his journalistic and fictional writings.

I had never heard of Joseph Mitchell, but I sat on the floor and read, knowing that I’d met one of my soul mates. He wrote with passion, but a complete lack of sentimentality, of pre-prohibition New York City beefsteaks, bearded ladies, the Fulton Fish Market, street preachers, a carved devil’s head falling from a Gypsy’s cracked egg, the Mohawk men who built the skyscrapers, overgrown cemeteries, the intricacies of oysters, a man who got hit on the head by a cow, and the collection of dusty wishbones hanging above the bar in the oldest ale house in Manhattan (McSorley’s – and there they still hang). It was a book about old New York City (1930s – 1960s), and its eccentrics. The eccentric in me took this as a sign. I moved to the city, and never regretted it, despite my love for this book lasting far longer than my love for my boyfriend du jour.

I’ve now re-read Up in the Old Hotel enough to have worn out five copies. I’ll probably wear out at least five more, since it’s still not available as an eBook. It’s true, I love this book. It’s also true that a few references/stereotypes, socially-acceptable in Mitchell’s day to many, gave me pause. In all aspects, this is a book true to its time.

It’s hard to pick a favorite piece from Up In The Old Hotel, but All You Can Hold for Five Bucks comes close to being mine. In it, Mitchell shares how the East Side’s beefsteaks differed from the West Side’s, and describes how women “corrupted” the whole darn thing. You’ll learn why beefsteaks were customarily held on the eve of holidays or Saturday nights, what the party-goers had written on their paper hats, and one chef’s opinion of ketchup. If your mouth isn’t watering for a taste of meat and a cold beer by the end, well, you may want to check your pulse.

There’s a palpable intimacy between Mitchell and his subjects, be they person, place or thing. There’s often humor, if gallows’ humor is your style; it is mine. You’ll feel the dialogue must have been dictated from recorded conversations, because no way could it flow so smoothly if it weren’t. I love knowing what people ate and it seems that Mitchell enjoyed that, too, because food is featured throughout this tome.

This book will pique your interest in topics as varied as Calypso music, black clams, and the concept of no longer using your favorite swear word. Joseph Mitchell was interested in everything, and after reading his take on any given subject, you will be, too. You may find yourself wanting to hunt down and explore the places and people Mitchell wrote about to see, hear and experience even the ghosts of what he described, in his wonderful curiosity, from Manhattan Island to Staten Island. Then, perhaps, you’ll be called to take a sojourn to Savannah, to The Isle of Hope, to see if Mr. Will Barbee’s dance pavilion is still in existence. If it is, be sure to have a hot bowl of Mrs. Barbee’s terrapin stew that Mitchell was so fond of, and let me know how it tasted.

Up In The Old Hotel
by Joseph Mitchell 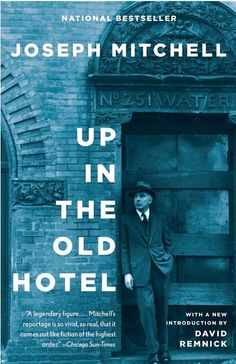 |+| Add to Your Shelf
Up In The Old Hotel
Joseph Mitchell

Saloon-keepers and street preachers, gypsies and steel-walking Mohawks, a bearded lady and a ninety-three-year-old “seafoodetarian” who believes his specialized diet will keep him alive for another two decades. These are among the characters that Joseph Mitchell—known for his precise, respectful observation, graveyard humor, and offhand perfection of style—immortalized in his reportage for the magazine.