“Even now, all these years after… I sometimes think of myself more as a failed soccer player than as an accomplished chef.”

Yes, Chef by Marcus Samuelsson is one of the most dazzling chef’s memoirs I’ve read. Marcus Samuelsson shares the story of his journey from Ethiopian adoptee to Swedish boyhood to world-renowned chef. Ever touching and always charming, Yes, Chef is a memoir that anyone who has chased a dream—culinary or otherwise—can enjoy.

As we travel through his life—through various dishes and cities—it becomes clear that Samuelsson’s upbringing sets him apart from most celebrities and food icons. Born in Ethiopia to a woman who essentially gave up her life to save him from tuberculosis, Samuelsson and his sister were adopted by a Swedish family who could not have children of their own. The family also included an older sister, Anna. Though Ethiopia is not where he grew up or learned to cook, Samuelsson doesn’t lose sight of his heritage and brings it to both his cooking and his life story. The first chapter opens with him discussing the importance of the Ethiopian spice mixture, berbere, in his family’s history. When Samuelsson succeeds in creating his own berbere, it feels as if he’s finally come “home.”

With the same elegant prose as Ruth Reichl’s Tender at the Bone and immersive kitchen scenes like those in Gabrielle Hamilton’s Blood, Bones, and Butter, Samuelsson invites his reader into his kitchen and life. We feel the heat rise on the cruise ship he is working on when one chef falls ill and Samuelsson and his crew must work double duty; we see his sweat as he climbs the ranks in Aquavit’s kitchen; and we smell the secret ingredients he searches for in Chinatown. Though it feels like Samuelsson’s appearance on Bravo’s Top Chef is glossed over, it’s done so tastefully and omitting such grand accomplishments keeps the memoir modest and maintains the sense of a “coming of age” tale. Beloved by everyone from the Obamas to Bill Clinton, Samulesson’s story is as intriguing for food lovers as it is inspirating for anyone who has had to persevere to achieve a dream.

Page-turning, atmospheric, and heartwarming, Yes, Chef is the perfect next read for anyone who just can’t get enough of the Food Network, celebrity chefs, or foodie memoirs. 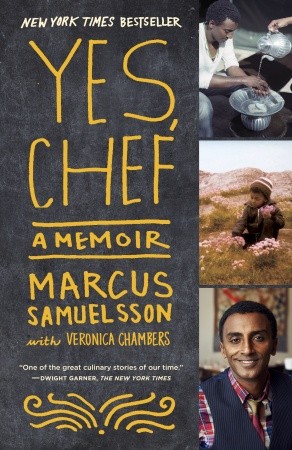 World-renowned chef Marcus Samuelsson chronicles his remarkable journey: from his childhood in an Ethiopian orphanage to his adoptive Swedish family who inspired his love of cooking to the opening of the beloved Red Rooster restaurant in Harlem, a restaurant where presidents and prime ministers rub elbows with jazz musicians, bus drivers, and nurses.