Each night, approximately forty thousand children lay down their heads on pillows in homeless shelters throughout New York City.  This statistic only accounts for children who are actually in shelters; it does not include the many children who have no permanent home and end up sleeping on floors, in cars or on the streets. These children are part of the 1.2 million homeless children in the U.S. today – the highest number since the Great Depression. If no one intervenes to help, the burden of homelessness will be carried by these children throughout their lives.

An Invisible Thread is the story of Laura Schroff, a busy sales exec who, while rushing through busy midtown Manhattan one day, felt pulled by “an invisible thread” toward a boy who was panhandling on the sidewalk. Her decision to stop and talk with him changed both of their lives forever.

Maurice is an eleven-year old who panhandles on a busy corner of 56th street. He has been skipping school and begging for money to buy food. At home, the refrigerator only holds Coke and baking soda because the people who are supposed to care for him are junkies. Laura tells him she will not give him money, but she offers to by him lunch. They go to McDonald’s, Maurice careful of this stranger offering him food and Laura not exactly sure why she offered but that meal is followed by another, and another, until meeting for lunch becomes a daily ritual. Eventually, Laura and Maurice’s lunch at McDonald’s leads to a strong friendship that will span more than thirty years.

For both of them, the relationship brings more change – both challenging and joyful – than either had suspected. Laura helps Maurice in school, teaches him basic things about life that we all take for granted but no one had ever shown him,and by her constancy lets him know that adults can be dependable and trustworthy. In return he teaches her compassion, the power of resilience, and what it means to feel unconditional love. The story traces their thirty-plus-year journey, including the time he asked her to please pack his lunch in a brown paper bag so that the kids at school know that someone loves him enough to make him lunch.

While reading this book, I felt such gratitude for everything that I take for granted. My heart completely broke when I read how Maurice never had a Christmas. His response to Laura after spending his first Christmas at her apartment: “ Thank you for making my Christmas so nice. Kids like me – we know everything that’s going on out there. We see it on TV. But we’re always on the outside looking in. We know about stuff like Christmas but we know we can never have it for ourselves, so we don’t think about it.”

We all hold the power to change someone’s life. Whether it’s a kind smile for a stranger or a warm hug for an old friend. You never know when the smallest act of kindness can make the biggest difference. Try it out today. The life you change might just be your own.

An Invisible Thread
by Laura Schroff and Alexis Tresniowski 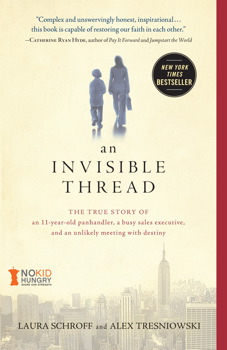 8 Touching Books That Will Make You Cry Like a Baby