The other night I accidentally started watching Merlin, the God-awful nineties movie starring Sam Neill. I am not sure who thought it was a good idea to have plastic-faced Miranda Richardson’s Queen Mab “create” Merlin to bring back the old ways or to have ridiculous CGI fairies flitting around, but watching it made me search for my well-thumbed copy of The Crystal Cave, by Mary Stewart.

The Crystal Cave is the first of three books focusing on Merlin, and part of a larger series on King Arthur that Ms. Stewart wrote over the course of almost two decades. As far as I am concerned it is the ne plus ultra of the pantheon of Arthurian legend retelling. This Merlin is not the wily old magician who plays a part in the myth of Arthur. This is the man who helped create Arthur.

The Crystal Cave is Merlin’s story, Arthur does not even make an appearance. This Merlin is not the beefcake Sam O’Neill or the naked highlander of romance novels. He is a wily, clever, and educated man who fights as much against his destiny as he does for it.

The story begins when Merlin is six and growing up a bastard in his grandfather’s court in Wales. His mother never reveals his father’s identity, but in a neat twist of Stewart’s own, Merlin learns that he is the son of Ambrosius, the man destined to be high king of all Britain.

Merlin is hyper-aware that he is nothing like the brutish dull boys at court who bully and abuse him, though it isn’t until he stumbles into a hidden cave mirrored with crystals and meets Galapas, the old man who becomes his teacher, that he begins to understand the gifts that make him different. His ability to “see” what has been and what will be becomes Merlin’s most powerful tool. This is the story of how he comes to harness that skill and many others Galapas teaches him to aid in the creation of a unified Britain. His struggle as he vacillates between embracing his power and wanting to flee it adds considerable tension and sometimes as you read you root for him to run away.

Stewart creates a perfect blend of imagined detail and semi-fact that makes you feel you are reading true history. The battles for the crown fought by the armies of Vortigern and Ambrosius, the descriptions of food and clothing, the damp cold and endless dark, everyone’s easy acceptance of the mystical power of nature—all make the world of Dark Ages Britain come alive. Merlin’s journey from dismissed bastard to powerful and feared magician is so plausible that it seems like history too. His hand in the birth of Arthur is a brilliant twist that makes every other version of the story pale in comparison.

When I read this book now, I wish J. K. Rowling would tell the story of Dumbledore’s years before Harry. But when I feel bereft of Dumbledore I can turn back to this tale of the most powerful magician and wait for the other one to be written.

The Crystal Cave can be read on its own and is completely enthralling without reading the other books in the trilogy, but I can guarantee that when you finish it you will want to continue and read the entire story of Merlin’s life and how Arthur fit in to it. 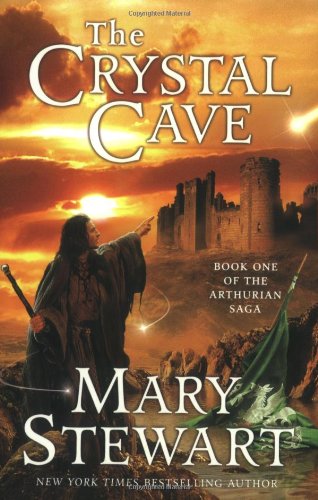