How does a writer follow up one of the biggest smash hits of the past ten years? If you’re Garth Stein, author of the beloved THE ART OF RACING IN THE RAIN, you retreat to the woods.

The towering conifers of Puget Sound are the setting for A SUDDEN LIGHT, Stein’s magisterial, inventive follow-up to the worldwide sensation THE ART OF RACING IN THE RAIN, now a film starring Milo Ventimiglia and Amanda Seyfried. Just as Stein charmed readers with the wisdom of Enzo, the race car–loving old lab terrier in THE ART OF RACING, he does the same with Trevor Riddell, the precocious scion of a once proud and mighty timber family.

During his summer vacation, Trevor, 14, arrives at the family’s palatial mansion in the forest as his parents embark on a trial separation. Trevor’s father is intent on cleaning up and selling off the enormous estate, hoping the windfall will alleviate the marital strains and bankroll the family’s happily ever after. Riddell House’s lone tenant, the feeble Grandpa Samuel, is not keen to relocate anytime soon, much less to an assisted-living facility, despite the persuasions of his grandchildren.

Although Grandpa Samuel is the only living tenant of Riddell House, Trevor soon meets a paranormal presence in the cavernous hallways. A specter speaking on behalf of Elijah, the original patriarch of Riddell House, also has no plans to let anything happen to the mansion. In fact, the ghost’s sole purpose is to ensure that Riddell House reverts to natural land, restitution for the millions of trees that built it and the family fortune, per the dying wish of Elijah. What starts as a summer vacation for Trevor soon turns into him refereeing his family across generations and astral planes.

A SUDDEN LIGHT defies categorization but affirms Stein’s stature as a major creative voice. Drawing upon his own childhood in the suburbs of Seattle and the sudden death of his own father in 2009, Stein blends a sweeping family saga while reinventing the ghost story. All of it, not so surprisingly, is told in lyrical, evocative, and energetic prose that elicits a range of emotions from chapter to chapter. It’d be a Herculean feat to follow THE ART OF RACING IN THE RAIN with its millions of copies sold, major film premiere, and untold tissues and shirtsleeves soaked, but Stein rises to the challenge with something that is, at least partially, not of this world.

A Sudden Light
by Garth Stein 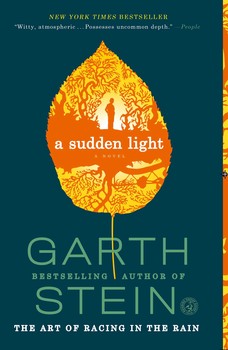 |+| Add to Your Shelf
A Sudden Light
Garth Stein

The 10 Most Popular Books of August

8 Books That Live Rent-Free in My Head

11 Autumnal Book Covers to Fall in Love With