When I first picked up THREE THINGS ABOUT ELSIE, Joanna Cannon’s sophomore novel, I was not expecting to be so deeply affected by the world inside Cherry Tree Accommodation for the Elderly. It is a charming suspense novel, yes, but it is also a heartwarming and profound treatise on lifelong friendships, bravery, and aging. I found myself thinking about this book long after I turned the last page, pondering my own lifelong friendships, and wondering about the lasting power of stories and what happens to truths that get left unsaid. (And immediately after finishing this book, I called my grandparents and my best friends.)

The novel opens with Florence Claybourne—the sometimes-taciturn octogenarian protagonist—on the floor of her apartment at an independent living facility for the elderly, waiting to be rescued. As the minutes pass, she thinks about her best friend, Elsie, and about the month prior, when a stranger, Gabriel Price, first arrived at Cherry Tree and brought up long-buried secrets and decades-old memories.

But Florence’s memory is not what it once was, and when she tries to warn everyone that the charming Mr. Price is not who he seems, the staff and other residents just think she’s confused. Only her best friend, Elsie, believes her, and the two must work quickly and without arousing suspicion to uncover Gabriel Price’s real identity—and determine just why he’s turned up at Cherry Tree after all these years.

Florence desperately wants to be believed, in part because she wants to finally tell the story of what happened to her and Elsie, even though she’s tried—and succeeded—for so many years to make herself forget. Why now, everyone around her wants to know, is she so determined to revisit the ghosts of her past? Why make such a fuss? In part, she says, because she’s waited so long to tell the right someone her secret and just never got around to it, but mostly because our stories still matter, no matter how old we are.

Drawing on her background in medicine and psychiatry, Cannon brings readers into the minds of each character, so that their memories, motivations, and personalities seem to step off the page, introduce themselves, and pour a cup of tea. The result? You feel drawn into Florence and Elsie’s friendship and the secret joys and tragedies they’ve held between themselves for nearly eighty years.

THREE THINGS ABOUT ELSIE is truly special. Underneath the cozy mystery is a poignant meditation on the strength of lifelong friendships, the power of telling stories and keeping memories alive, and the desire to leave the world a slightly better place. It is heartwarming, pensive, and deeply satisfying. Cannon masterfully weaves the many threads of this story into a surprising conclusion that will break your heart just a bit, but will ultimately leave it feeling a size or two bigger. 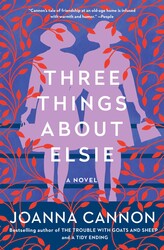 |+| Add to Your Shelf
Three Things About Elsie
Joanna Cannon