I get book recommendations from a lot of places, but until recently I’d never had a novel recommended to me. . . by a novel. I was reading PRETEND I’M DEAD by Jen Beagin, and someone is trying to convince the protagonist, Mona, to read THE ODYSSEY, but she says she’s busy reading “a Victorian homoerotic thriller called The Fingersmith. . . I can’t put it down.” I’d had FINGERSMITH by Sarah Waters on my shelf for years and never gotten around to it, but suddenly I had to start it immediately. Mona was right—I couldn’t put it down. It’s broken into my lineup of top ten favorite books of all time, which is quite a feat. The novel is like Charles Dickens meets Gillian Flynn, mixed with a romance I still can’t stop thinking about months later, honestly.

This engrossing, atmospheric story takes us to the slums of nineteenth-century London, where Sue Trinder is an orphan who has been raised by petty thieves—“fingersmiths.” Her beloved adoptive mother has always said that Sue will make their fortune someday, and Sue deeply wishes to be able to repay her family for taking her in. So when an elegant conman known as Gentleman offers her a chance to help him swindle a rich woman out of her inheritance, Sue accepts. Their mark is Maud Lilly, a naïve, sheltered young woman who is set to inherit vast wealth as soon as she marries. Sue is to pose as her maid and aid Gentleman in seducing her. Once he marries her, they will commit Maud to a madhouse and the money will be theirs. It seems easy, until Sue meets Maud and starts developing strong, unexpected feelings for her. And Maud may not be the clueless mark they expected.

To say anything more would be to start giving away twists, and FINGERSMITH has them in spades. Every time I thought I knew what was going on, something happened that threw everything into question. This is a book of secret identities, hidden motivations, and betrayal on betrayal on even deeper, more gutwrenching betrayal. Often I can see twists coming in thrillers, but some of these were honestly mindblowing—the kind that make you want to reread everything you’ve already read, knowing what you now know. But this is also a novel about love and desire. It asks: Is it possible to fall in love with someone, even as you are secretly working to betray and destroy them utterly? The answer is yes, and reading about the tormenting conflicting desires and repressed longing between these two women was completely engrossing. Sarah Waters takes the conventions of the Victorian bodice-ripper genre and turns them on their head in a way that feels fresh, subversive, and breathlessly sexy.

I’ve already read the book twice in rapid succession (it doesn’t take long because honestly, the last 250 pages demand to be read in a single sitting) and still can’t get enough of it. Luckily, there are also two excellent film adaptions: a two-part BBC miniseries that is a pretty faithful adaption of the book, and The Handmaiden, a film by celebrated Korean director Park Chan-wook that sets the events in 1930s Korea and is somehow even more dark and twisted than the source material. I hope you devour them and then spread the word, because FINGERSMITH is a treasure. 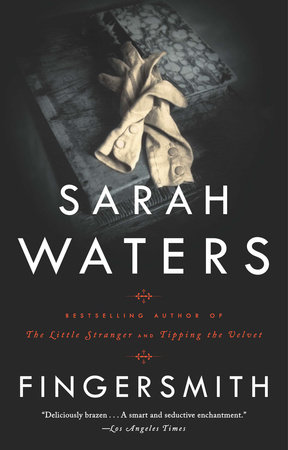 Orphan Sue Trinder is raised amongst “fingersmiths”—transient petty thieves. When a fingersmith known as Gentleman asks Sue to help him con a wealthy woman out of her inheritance, she never expects to pity her helpless mark, let alone come to care for her. But no one and nothing is as it seems in this Dickensian novel of thrills and reversals.