One of the great things a novel can do is surprise you.

Descriptions of Mohsin Hamid’s EXIT WEST told me that it would be about a young couple escaping an unnamed Muslim-majority country via mysterious doors. Reviewers said the book was timely and political, touching on war, religion, and the immigration crisis. All of this interested me and made me want to read the book. However, I was surprised and delighted to find that it was an incomplete description of this slim, brilliant novel’s scope. The book is about a chaotic and divided world, but it is also about the timeless, universal things that human beings share.

Love is one of them. If you have a short fuse for sentimentality, don’t fear. The relationship between Nadia and Saeed, the protagonists of EXIT WEST, is profoundly honest, and anything but twee. It rings true on the discomforts of sexual fumbling. Nadia, the bolder of the pair, is furious at Saeed’s conservatism. “Are you fucking joking?” she asks when he says they should wait to have sex. It is wonderful on the heady rush of new love, such as when Nadia and Saeed eat magic mushrooms on the rooftop of her apartment building, and Saeed marvels that Nadia’s eyes “were like worlds.” They come down together at dawn, “facing each other, sitting, their wrists resting on their knees, their knees almost touching.”

It is even more perfect on the series of befuddling encounters that mark the slow dissolution of a relationship.

Love is not the only universal in EXIT WEST. In one of the sly, stand-alone vignettes that are scattered throughout the book, Hamid describes an old woman who has lived in the same Palo Alto home her entire life. She has remained physically static, but the world has changed around her. The houses in her neighborhood have been bought and sold like stocks; the faces she once knew are gone. The vignette ends on a striking notion: “It seemed to her that she too had migrated, that everyone migrates, even if we stay in the same house our whole lives, because we can’t help it. We are all migrants through time.”

Hamid is not claiming that the stable life of the woman in Palo Alto is the same as the dreadfully uncertain ones of Nadia and Saeed. All things are not equal for all people at all times. But Hamid’s suggestion that motion is something that crosses all divides is profound. Motion in EXIT WEST is constant, and change inevitable—through time, place, and circumstance—for everyone.

I should not have been surprised that a novel shortlisted for the Booker Prize, and listed as one of the 10 Best Books of 2017 by the New York Times, would contain such multitudes and universal truths, or that it would be capable of revealing the surprising connections that exist between human beings. Novels, better than any other medium, can invent characters who go through experiences unlike anything you’ve ever known, and yet feel strangely analogous to the events of your own life. EXIT WEST does this again and again. It’s a contemporary novel, focused on the immigration crisis, that is also timeless. 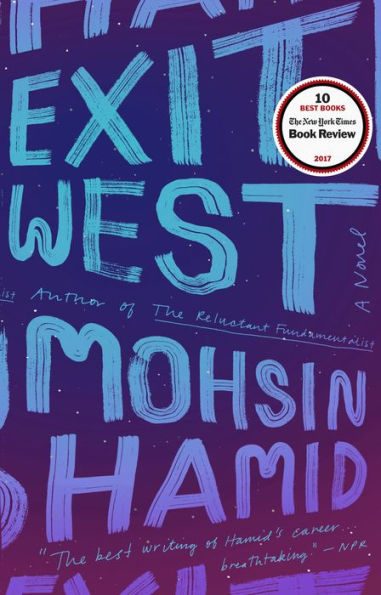