A GENTLEMAN IN MOSCOW, Amor Towles’s incredible follow up to his 2011 debut RULES OF CIVILITY, is not only hard to put down, but it’s difficult to drop your underlining pencil while you read as well. Reading this profound, quotable novel is like spending a day with the classiest friend you have and then wracking your brain after thinking Now, what was that incredibly insightful and merry way he described that one thing—only to find that there were simply too many things to keep track of.

The reputable Count Rostov has been banished to live out his days in the glamorous Metropol hotel in the center of Moscow. Faced with a brash stripping down and minimizing of his former comforts, the Count shows his cunning resourcefulness in making attic dwellings fit for a gentleman of leisure. He laments the starkness of the room and its internal dreariness in a delightful internal monologue that I will leave for you, dear reader, to enjoy.

Questions soon begin to arise: What happens when privilege becomes a prison? How do you find a sense of purpose when freedom has been taken away? What role do relationships take on when you no longer have the upper hand to come and go as you please? As the Count himself notes, “If a man doesn’t master his circumstances then he is bound to be mastered by them.” All is revealed by an upstanding man who loves his country, adores his countrymen, and has a tongue-biting respectful tone with his captors. So, you can be assured that these questions will be given careful contemplation and appropriate debate.

Where Towles has been consistently successful and effective in both his novels is in capturing the voice of the proud and educated. Though the character of the Count will surprise you in his actions from time to time, he will remain steady in voice and flawless in temperament. At first he seems to act as a tour guide to the hotel, taking us about from room to room, and introducing us to inhabitants and patrons one by one, but where the magic of the novel lies is when the Count opens his own heart and mind for touring, letting us in on all thoughts both prudent and not. With his own signature brand of charm he invites readers to befriend him entirely.

A GENTLEMAN IN MOSCOW contains several volumes within the novel, and is laid out to highlight life-changing events during the Count’s captivity. As is true with most lives, you can spot turning points and irreversible decisions. The exact moment when things seemed to be looking up and when they begin to unravel. And more surprising moments come when unlikely characters begin to become a kind of family for the Count. The confirmed bachelor and condemned man finds himself joining a larger tapestry not only in the hotel, but in the world at large through the people who have the ability to come and go as they please but keep returning to him.

In a moment when manners, customs, and civility seem to be slipping from our fingertips, Towles has harnessed another time and held on tight. We are given the rare treat of a character true to his word, morally sound, and unafraid to stand by his convictions. Perhaps the reason I couldn’t put the book down was because it was such a welcomed contrast to the current news cycle, or perhaps it was because I, like so many others, fell under the Count’s spell. But for sure I can tell you that A GENTLEMAN IN MOSCOW will stay with its readers for years to come.

A Gentleman in Moscow
by Amor Towles 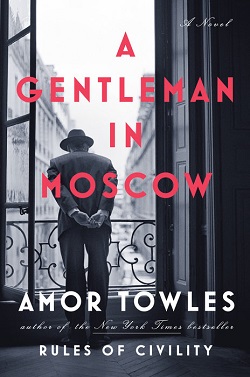 |+| Add to Your Shelf
A Gentleman in Moscow
Amor Towles

Read with a Moscow Mule

Maybe it’s the copper cup or the alliteration in the name that attracts us to this beverage again and again. And the perfect companion is A GENTLEMAN IN MOSCOW, set in the beautiful Metropol hotel in Moscow. Amor Towles spins the immersing story of Count Alexander Rostov, who is sentenced to house arrest after being deemed an unrepentant aristocrat.

A Peek Behind Stu’s Shelf