Books are the perfect getaway, especially when I’m in desperate need for a warmer climate, when I’m having a bad case of wanderlust, or when I just need a little excitement in my everyday life. THE SHADOW OF THE WIND by Spanish writer Carlos Ruiz Zafón was the perfect antidote for all three.

Set in Barcelona in 1945 shortly after the Spanish Civil War, a ten-year-old boy named Daniel wakes up distressed one morning, unable to remember the face of his mother, who died four years earlier. As a way to comfort him, Daniel’s widowed father takes him to the Cemetery of Forgotten Books, a secret library housing books that have been forgotten by the world over the years. When Daniel is told he can pick any book he wants, he goes to the shelves and finds an unfamiliar novel called THE SHADOW OF THE WIND by Julian Carax.

After staying up all night to read it, Daniel emerges from his bedroom the next morning with a feverish desire to find the rest of Carax’s novels. But as he begins his hunt, he learns that someone has been mysteriously destroying every copy of every book that the deceased author has written—and that his copy may be the last in existence.

Over the next eight years, Daniel searches the city for any clue that could explain Carax’s mysterious past and discover why someone would want to destroy his novels. Daniel’s journey leads him to uncover Barcelona’s darkest secrets, ones filled with deception, madness, doomed love, and murder.

Zafón’s writing is smooth and eloquent, and his descriptions paint a vivid picture of post-war Barcelona. The story explodes with countless characters and backstories (we meet a flamboyant watchmaker, a murderous policeman, and a beggar-turned-book-investigator, to name a few), and Zafón takes the time to explain each new person in detail.

I found myself reading late into the night, only to be left with a cliffhanger at the end of each chapter and desperately wanting to know what would happen next. With every new piece of information Daniel learned about Carax, there would be twice as many questions about the author and his supposed demise.

I became completely absorbed in the story. I couldn’t take a full breath until I finished and found out what had actually happened—and the secrets that unfolded left me speechless. Full of little historical tidbits, folklore, and, of course, books,THE SHADOW OF THE WIND has everything one could want in a novel.

And even though I finished this story, my travels in Barcelona haven’t ended. I picked up the second novel of the series, THE ANGEL’S GAME, right away, eager to fall back into Zafón’s mysterious and magical world.

The Shadow of the Wind
by Carlos Ruiz Zafón 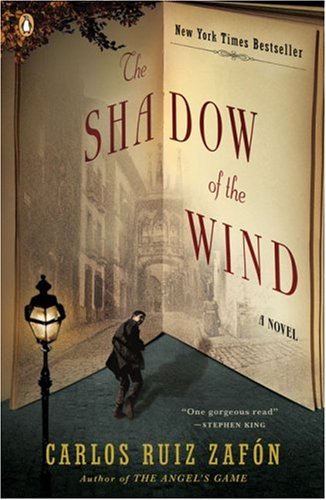 Notice: Trying to access array offset on value of type null in /home/offtheshelf/public_html/web/app/themes/ots/_inc/template-parts/books/book-modal.php on line 31
|+| Add to Your Shelf
The Shadow of the Wind
Carlos Ruiz Zafón

As Barcelona slowly heals in the aftermath of the Spanish Civil War, Daniel, an antiquarian book dealer’s son, finds solace in what he finds in the “Cemetery of Forgotten Books”: a mysterious book entitled The Shadow of the Wind, by one Julián Carax. But when he sets out to find the author’s other works, his seemingly innocent quest opens a door into one of Barcelona’s darkest secrets—an epic story of murder, madness, and doomed love.