Thanks to its description as post-apocalyptic science fiction, I initially thought Station Eleven was something to avoid. I’m glad I didn’t, because it is a triumph. It glitters like a dark star, leaving the reader enchanted, authentically moved, and somehow longing for the gallant, threadbare humanity of a ruined world. This slender book feels immense—though sparely told, it never shrugs off the import it claims.

The story opens with death in art foretold, a scene that could have creaked like an antique schooner but instead steps forth gravely and boldly, presaging the whole plot. Kirsten Raymonde, an eight-year-old actor, is onstage with Arthur Leander, a Hollywood A-lister in decline and making do in a classy turn as King Lear. Suddenly, Arthur is felled by a massive heart attack, dying before the child’s eyes, despite the earnest ministrations of audience member Jeevan Chaudhary, a former paparazzo who has found greater purpose in life as an EMT.

That night, Jeevan is witness not only to the extinguishing of one life, but, perhaps, to almost all. As the news tells of whole cities felled by a devastating, mysterious pandemic, Jeevan and his disabled brother are stranded in a high-rise apartment. They look down on streets emptying of cars, filling with mayhem, and then filling with silence. Finally, even the news reporters vanish. The lights go out. Civilization is stunningly, believably, in the gloaming.

Fifteen years later, little Kirsten is a survivor in every sense. A grown woman, still an actor, now a warrior, she is part of a nomadic band called The Symphony. It’s a ragtag group of the gifted, forlorn, stalwart, and mad, which roams the thinly populated wastes around the Great Lakes, performing plays and music, foraging for food, fighting off aggressors with crossbows. Most stunningly, and believably, they dare to stake a claim for human life as more than subsistence. On the side of the wagon, and on Kirsten’s tattooed arm, is a line from Star Trek (of course): “Because survival is insufficient.” Life is indeed brutality, but not without art.

In Emily St. John Mandel’s majestically capable hands, the narrative moves back and forth in time, somehow never for a moment releasing the reader as it careens from frank suspense to elegiac interludes of breathtaking beauty. Arthur Leander is dead, but he is not gone, nor is Jeevan. Kirsten’s devotion to the exaltation of humanity leads her straight into blunt human peril as the prey of a fierce, psychopathic self-proclaimed prophet.

The past is played forth in the future, and every character is linked to every other, in startling and inextricable ways. If there is an overarching message that Station Eleven burns into the memory, it is exactly this: no human being’s destiny is ever free from any other’s, for everything that is better, for everything that is worse. 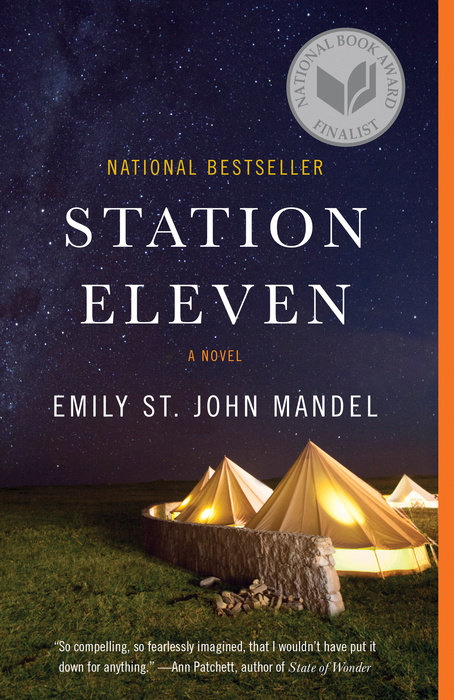 For fans of “The Walking Dead”

While “The Walking Dead” hero Rick Grimes and his gang are keeping hope alive but losing their grip fast after a zombie apocalypse, STATION ELEVEN’s Kirsten Raymonde and her band, the Symphony, have dedicated themselves to keeping the remnants of art and humanity alive after a mysterious pandemic has ravaged civilization.

A Reader’s Guide to the Impending Apocalypse