ANNIHILATION is my go-to rebuttal for every utterance of the maxim “Don’t judge a book by its cover.” Please judge this one: Jeff VanderMeer’s novel and the physical volume containing it are just gorgeous. I first caught sight of it amidst a pile of other new releases when it debuted, and I was immediately drawn to its aesthetic. From the gilding of the cover to the stylized scientific illustrations inside and out, this cover is both physically beautiful and just slightly disturbing form to match VanderMeer’s prose. It’s the visual carnival barker to his star attraction.

The first installment of VanderMeer’s Southern Reach Trilogy, ANNIHILATION is an intriguing and creepy supernatural mystery about a secret location that has seemingly identity-warping properties. The story is told in a series of journal entries and mission logs penned by a woman referred to only as The Biologist, a member of the twelfth expedition into a bizarre coastal region menacingly and exclusively called Area X. Her teammates, all women, include a Surveyor, an Anthropologist, and a domineering Psychologist. They have brought no advanced technology with them—doubting it would function properly in the strange environment—and abandoned their names—under similar suspicions.

The land itself and local fauna are vibrant, yet eerie: all traces of prior civilization have eroded more quickly than should be natural, and wildlife has adopted unsettlingly human physical characteristics. Perhaps most troubling, information returned by previous expeditions appears critically incomplete. Massive, intricate, geological and biological “anomalies” are only casually referenced or are fully omitted from past mission reports. Oblique mentions of strange moaning sounds emanating from the marshes near base camp fail to mention the hulking, galloping monstrosity that stalks the team.

Worse, The Biologist suspects that the psychological and hypnotic conditioning the team has been through to endure their stay in the surreal Area X may have had far more nefarious purposes. As human error mounts and what little trust there was amongst the twelfth expedition breaks down, The Biologist notes the distinct impression of being watched, not by others, but by Area X itself.

What could easily or lazily become an action story or sci-fi adventure burns slowly, tempered by VanderMeer’s Hitchcockian mastery of atmosphere. Long, flowing descriptions of wildlife and strange topology reinforce the humid, drawn-out pace of the twelfth expedition. Raising more questions than she answers, The Biologist reveals only a glimpse of her own character and history, which is inextricably linked to the alien wilderness, mirroring the twelfth expedition’s insubstantial, circuitous findings in Area X. With a mounting lack of understanding, VanderMeer crafts an oppressive sense of an immanent and unsettling something. We anticipate fantastical science or Lovecraftian horrors around every turn, mounting to a final delivery which refuses to hurry or quell our sense of unease.

Annihilation is very much a story about atmosphere and terroir, the very character of an environment, how humans change it and are changed by it. It is a novel about Area X, and a novel about The Biologist. Though completely separate in their origins and their very natures—one is personal, the other historical, even geological—ANNIHILATION is in fact a story about how stories intertwine. 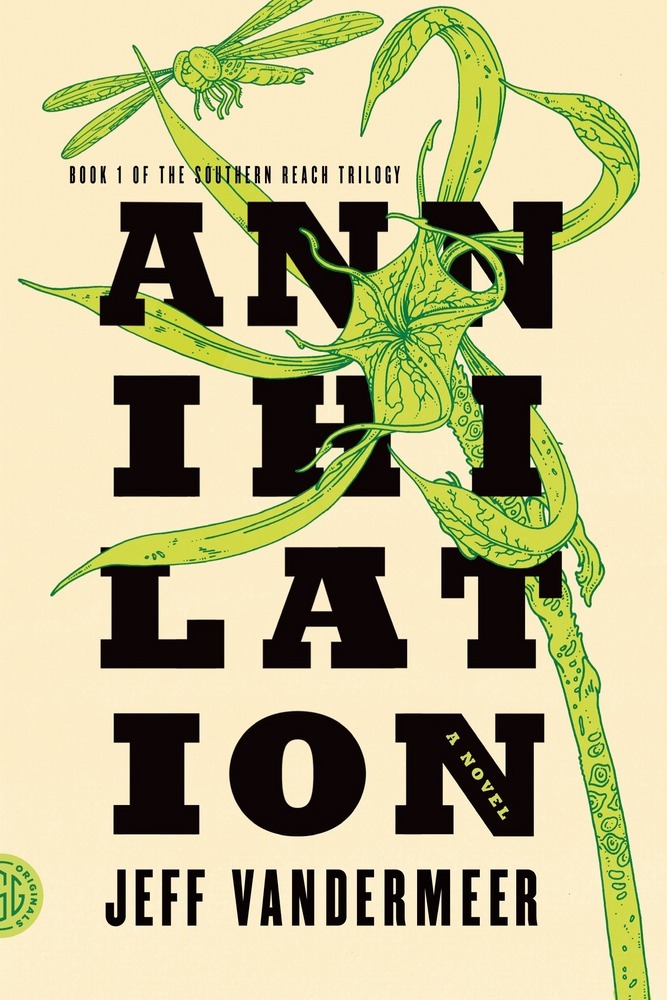 Notice: Trying to access array offset on value of type null in /home/offtheshelf/public_html/web/app/themes/ots/_inc/template-parts/books/book-modal.php on line 31
|+| Add to Your Shelf
Annihilation
Jeff VanderMeer