I came upon David Gilbert’s novel & SONS by chance: I was browsing the shelves of The Corner Bookstore, an Upper East Side landmark, during the summer of 2013 when I noticed that the staff was setting up rows of chairs for a reading. When I asked what event was about to take place, they told me that it was for a novel set in the New York literary world, about a reclusive author and his family. I was sold (and so was a copy of the book).

It was the best kind of author reading, one set in the same place as the book so it seems to come to life all around you. As I started the book that night, I realized that this was the first of many meta moments, all of which added up to a great story.

& Sons takes place over the course of one week, beginning with a funeral. The ailing A. N. Dyer sits in the front pew alone, grieving the loss of his best friend Charlie Topping, and enduring the stares and whispers of the mourners around him. Not because he’s done something wrong, but because he’s actually there—instead of in a New Hampshire bunker (like his real life counterpart, J. D. Salinger), Dyer is usually sitting in the study of his Upper East Side apartment, looking out over Central Park. For the last few years, he’s been estranged from his two sons from his first marriage, Richard and Jamie, with only his illegitimate son Andy for company. A. N. Dyer, you see, is the reclusive Pulitzer Prize–winning author of the book that defined a generation, a boarding school masterpiece called Ampersand.

This double use of “and sons” and “ampersand sons” is the first brilliant detail that Gilbert weaves into his narrative. They both correctly classify Richard, Jamie, and Andy, making it clear that not only are they part of a family lineage—a business, even—but that they are also constantly in the presence of their father’s work. The Dyer patriarch’s initials also happen to spell “A. N. D.”

Andy, especially, with his father’s name and in the unfortunate position of being a student at his alma mater during the fiftieth anniversary celebrations of the novel, is always in its shadow. The three boys come together to grieve for Charlie, who was a sort-of uncle to them all, but it’s the first time they’ve been together under the same roof in a while, and all have different feelings about their father, and each other.

The novel also contains some clever Easter eggs for CATCHER IN THE RYE fans: the Central Park carousel, boarding school frustrations, relationships with questionable women. And that’s not the only literary icon Gilbert tips his hat to. While Salinger’s classic might be the most obvious inspiration for Ampersand, he nods to THE GREAT GATSBY by telling the story through & Sons’ omniscient narrator, Philip Topping, the son of A. N. Dyer’s recently deceased best friend Charlie. Philip is an outsider, looking into the privileged and often dysfunctional world of the Dyers, floating along the parties and scandals of the Upper East Side.

As he spends the week after his father’s death with the Dyers, Philip takes the reader into the book parties, back rooms, and complicated dynamics of his longtime friends, spending the most time with Andy, whose uncanny resemblance to and close bond with his father adds another interesting layer to this intricate New York tale. We—and Philip—are brought so deep into their world that sometimes the lines blur between truth and fiction.

The beauty in & SONS, like other classics, is found in its characters and their complicated stories—their humanity, their flaws, and their private moments. Though you may not want to be part of the Dyer clan by the end of it, you’ll definitely feel like you understand them. Just like a good old family reunion. 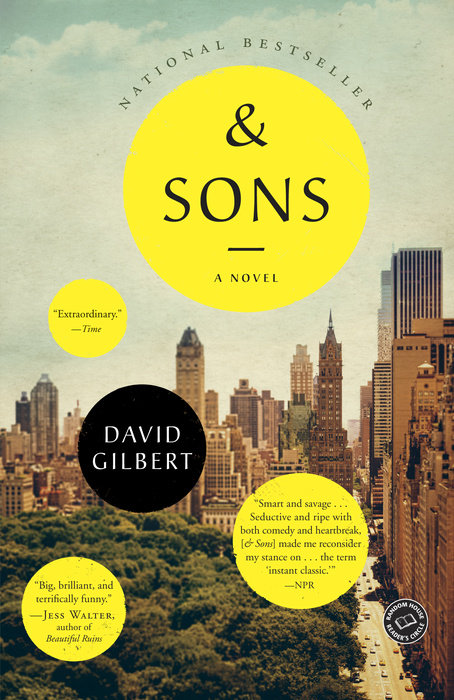 David Gilbert’s tale of family, fiction, and friendship begins, interestingly, with a funeral. Charles Topping’s body lies in a casket when his lifelong friend, the reclusive author A. N. Dyer, gives the eulogy and steals the show. As the novel unfolds in the privileged world of Upper East Side society and the New York literary scene, family secrets are revealed through the eyes of Topping’s and Dyer’s sons.

Read a review of & SONS here.