As a first generation Nigerian-American, I’ve witnessed friends and family waltz into the allure of American culture, following trends and customs without question and embracing the American dream of money and status. The ease with which they shape-shift from one persona to the other—accent on, accent off—is bewitching. I’ve also seen friends reject American culture altogether, question the validity of race and challenge racism, and endeavor to rise above the “heaviness” of blackness.

In Chimamanda Ngozi Adichie’s celebrated novel Americanah, shades of all these truths are present. Ifemelu, who her friends teasingly call “Americanah,” has found her way out of Nigeria’s military dictatorship to attend college in the United States. It is in America that she experiences her blackness for the first time. An astute observer of race in America, Ifemelu unabashedly dissects its nuances and complexities in her blog “Raceteenth or Various Observations About American Blacks (Those Formerly Known as Negroes) by a Non-American Black.” Her blog rapidly grows in popularity and prominence, fueled by her penetrating insight into the uncomfortable topic of blackness in a “race blind” America.

The novel’s opening scene speaks volumes: three years after her arrival on American soil, she makes the unnerving trip from scenic Princeton, New Jersey, to the more rundown town of Trenton in order to find a decent African hair braider. This choice of setting illuminates the nuances of black culture, the hair-braiding salon is where she’s at home, but not quite.

Ifemelu has been transformed by the “companion” identity that has added an unanticipated layer of complication to her Nigerian identity. She writes poignantly in her blog:

“Dear Non-American Black, when you make the choice to come to America, you become black. Stop arguing. Stop saying I’m Jamaican or I’m Ghanaian. America doesn’t care. So what if you weren’t black in your country? You’re in America now.”

These two warring identities—African and African-American—compete with each other within Ifemelu’s life, causing her to make choices out of character. Adichie’s nuanced treatment of identity in Americanah transcends race, gender, and nationality and many passages are captivating. She writes: “She did not know what it was but there was something wrong with her. A hunger, a restlessness. An incomplete knowledge of herself. The sense of something farther away, beyond her reach.” As Ifemelu struggles with this loss of self, other characters face similar aimlessness: her aunt, Uju, also a Nigerian transplant, is reluctant to leave an abusive marriage because being an unwed mother is un-American; Uju’s son attempts to remove himself from a society he feels does not want him. And then there’s Obinze, Ifemelu’s childhood friend and first love. A bright student who promised to join her in the States, Obinze is stuck navigating the dangerous world of undocumented life in London. His is a voice that lends considerable perspective to the story.

Like Chinua Achebe’s Things Fall Apart, Americanah has become a staple in the Nigerian literary world. In my circles—among Nigerian youth and literary folk alike—when topics of race and identity come up, the question “But have you read Americanah?” is usually asked with eagerness and met with enthusiasm. I’ve pondered tirelessly on how Adichie surmounted the daunting task of making conversations on race blunt, funny, and heartfelt. At the heart of Americanah is the truth about blackness in public space: how it can feel like a huge responsibility to some, how it offers comfort and community, and how it can feel like the history of a whole people slung on the backs of everyday citizens going to work, to the store, or to the salon. 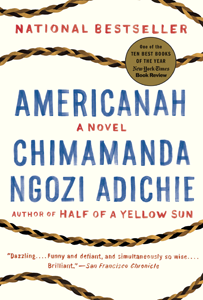 This powerful story of race and gender is centered on Ifemelu, a brilliant and self-assured young woman who departs military-ruled Nigeria for an American university where, for the first time, she is forced to grapple with her identity as a black woman. Ifemelu faces difficult choices and challenges, suffers defeats and triumphs, finds and loses relationships, and eventually achieves success as the writer of an eye-opening blog about race in America. Fearless and gripping, Americanah is a richly told story set in today’s globalized world.

8 Novels About First Love So Moving Our Hearts Might Burst

13 Essential Books Everyone Should Have In Their Home Library