For many, the question “What’s your favorite book?” elicits feelings of terror, dread, and exhaustion. Racking your brain for that semi-impressive title that will show you pay attention, that you’re intellectually evolved, that you’re interesting, you might say you don’t have one, that there are too many to count. For a small period of time, I took this approach. Then, when I was fourteen, I found it. The elusive “life-changing, best-of-all-time, can’t-put-down-and-never-want-to” book. Now, whenever someone asks me “the question,” the answer is immediate: Richard Russo’s 2002 novel Empire Falls.

Empire Falls is the Pulitzer Prize–winning story of Miles Roby, a lifelong resident of the titular small town in Maine, who manages the crumbling Empire Grill and is in the midst of a divorce from his wife, Janine. He has a pot-selling, former alcoholic for a brother, an introverted but incredibly bright teenager for a daughter, and a wealthy family slowly buying out the town as an antagonist. The book flashes between Miles’ present and past, revealing things about his family life, the town’s descent into bankruptcy, and the relationships between people who have never known anyone or anywhere else but this old mill town. I can’t really say much more about it, because the beauty of the book is in its details and last-minute twists, but it’s a phenomenal representation of small-town life, family dynamics, and the decline of the American Dream.

It also, in a weird and fortuitous way, stalked me to college and back.

Even after a few reads (and viewings of the HBO miniseries), I never thought anything of Empire Falls‘ location or author’s background until almost six years after my first encounter with it, when I listed it as “One of the Books That Changed My Life” for an English class assignment while attending Colby College, a similarly small town in Maine. A week or two later, my professor joked that I must have done my research. With a genuinely confused look on my face, I asked her what she meant. She replied, slowly realizing I had absolutely no clue, that Richard Russo had been a professor at Colby for years. In fact, he’d written parts of it while he’d still been on campus—didn’t I ever notice that he mentioned Jorgensen’s Café (a local spot and home to my favorite chicken pesto wrap) in the acknowledgments?

Never has there been a stronger endorsement for the benefits of reading the acknowledgments section of a book.

From that moment on, I saw Empire Falls in a new light, because I saw it all around me. When I drove down I-95 or into small towns on weekend road trips for breakfast at a hole-in-the-wall diner, I sat with Miles and Tick and Janine, saw what they saw and ate what they ate. It brought the story alive in a way that I never would have expected, and it’s so rare that I don’t think it will happen again. Last year, I had that odd feeling again when I randomly walked into the Union Square Barnes & Noble one night and saw that Mr. Russo was giving a talk for his latest book, Elsewhere. I bought a fresh copy of Empire Falls and ran upstairs. At the end of the event, I got in line and asked him to sign it for me, though it probably sounded something like gamfmgnnnCOLBYdmneinLOVEYOURBOOK. The next day, I started it again, and the magic was still there.

Looking back, I may have been too young when I first read Empire Falls, a preteen growing up in a suburb of New York City, well-traveled and aware of what the world was like but blissfully oblivious to the heartbreak, frustration, and weight of it. I related most to Tick, Miles’ clever daughter who’s engrossed in art, avoiding her ex-boyfriend, and trying to befriend the lonely, quiet kid in her class. That’s why every couple of years I’ve reread it, just to be reminded of the profound impact it had on me and of the power a book has to transform itself every time you read it at a different stage in your life. The ending doesn’t shock me anymore, nor does the rawness of what happens in that small little town. But the amazing thing about it is that everything else still does. The pain, the anger, the moments of happiness, the changing dynamics, and the weird combination of optimism and pessimism it ends with. It’ll always escape the yearly purge of books, always have a place on my shelf, following me wherever I go.

There’s no way to tell how this book will continue to impact my life. Maybe next I’ll run into Richard Russo at my tenth Colby reunion, eating a chicken pesto wrap at Jorgensen’s . . . who knows. What I do know is that fifty-year-old me will probably understand more about Miles than fourteen-year-old me ever could. Forty-year-old me might not hate Janine as much, and seventy-year-old me might suddenly find herself laughing instead of cringing when Miles’ curmudgeonly father takes the stage. How often do you get to relive a story over and over as each one of its characters? Try out Empire Falls, and you’ll find out. 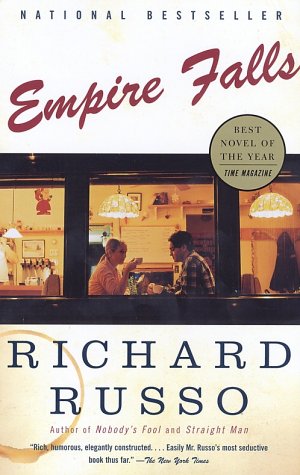 I will never not recommend this book, and what a perfect excuse again! The winner of the 2002 Pulitzer Prize, Richard Russo’s novel EMPIRE FALLS follows Miles Roby (the owner of the Empire Grill), his family, and his friends in the small, blue-collar, and slowly bankrupting titular Maine town. —Julianna (Maine)

A Peek Behind Julianna’s Shelf

13 Authors That Define and Celebrate America

When Your Favorite Book Follows You