I’m not sure if there’s a word to describe that feeling of electricity you get when you read a book by a talented author you’ve never read before, but let’s just say The Humans by Matt Haig will make you experience whatever that word might be.

The Humans is narrated by an extremely logical alien from a distant planet , a place where individuality doesn’t exist. He has just arrived on Earth with a mission: to wipe away all evidence of a recently deciphered math equation called the Reimann Hypothesis. Worked out by Professor Andrew Martin, this solution would allow humans to unlock new forms of technological innovation and would likely result in the destruction of multiple planets. To carry out his mission, the narrator is transformed into the likeness of the ill-fated Professor and is prepared to destroy anyone or anything that gets in his way; however, he must first overcome an unexpected roadblock to destroying the Professor’s notes: not having any pants.

At points warm, tense, clever and laugh-out-loud-funny there are many wonderful scenes as he adjusts to life on earth, including his hysterical repugnance of the human form, but for me the most poignant storyline in the book is the one that follows the inner workings of the Martin family. While trying to blend in, the narrator slowly reassembles the pieces of the real Professor Martin’s broken marriage and begins to mend the terrible relationship Martin had with his son. Along the way, our alien guest not only learns to accept the irrationality of earth but also to understand and even enjoy what is to be human.

Although it might seem on the surface to be a silly sci-fi novel, it is so much more.

This book is equal parts family drama, love story, and hilarious satire. It vividly describes serious topics such as depression, bullying and suicide, but most importantly, it digs down to the core of the human experience: life itself.

For those who love dark comedy or who have previously enjoyed The Curious Incident of the Dog in the Nighttime, The Daily Show’s Earth (The Book): A Visitor’s Guide to the Human Race, the works of Kurt Vonnegut, or even the television show Louie then you need to read this book! This is without a doubt the best book I have read in a long time, and I can’t wait to check out the Matt Haig’s other titles, including his bestselling vampire-family-out-of-water novel, The Radleys.

The Humans
by Matt Haig 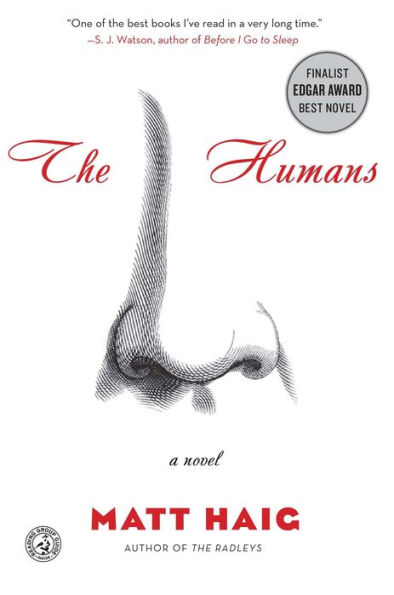 |+| Add to Your Shelf
The Humans
Matt Haig

8 Emotionally Fulfilling Novels for Fans of The Midnight Library

12 Mathematical Books to Help You Solve Your Reading Rut Problem

Best Way to Save the World? Have an Alien Fall in Love