A Mountain of Crumbs by Elena Gorokhova is a beautifully written and lyrical memoir about coming of age in the Cold War years of 60’s & 70’s Soviet Russia. With every article about the Olympics and the Crimean Crisis, I am reminded of this book and how the country, which pretends to be so different, is still very much the same as the one Elena grew up in and fled from the moment she could manufacture the chance.

As much as this is a story of enduring life under the suffocation of Communist rule it is really the story of a girl struggling against – and breaking free from – a powerful over-bearing mother who she loves and seems to fail at every turn.

Elena’s mother, a doctor, Professor of Anatomy, and avowed Communist already had one daughter and had lost two husbands before she married Elena’s father in 1950. What she went through during the two wars, Stalin’s Purge and the Famine made her determined to protect her children from harm and want but, to Elena, her mother’s irrational dictatorial ways mirrored those of the State. It is to the writer’s credit that you sympathize and can understand her mother’s fear and strength, knowing that the wrong thing said in the wrong place can lead to disaster and that if she didn’t force as much as she does out of her dacha garden in the summer, they might not eat during the winter.

But Elena is not the obedient Young Pioneer and Soviet citizen her mother and country expect her to be. She is a girl who dreams of speaking English and exploring the world.  She wants to talk about books and poetry, to understand if personal happiness and duty are mutually exclusive, she wants to be kissed.

As a child of parents who work for the state and the sister of an up-and-coming actress who stars in state film and theater productions Elena is immersed in the hypocrisy of vranyo – the knowledge that the system is corrupt, the people know it’s corrupt and the government acknowledges they know and everyone moves along.  Even so, Elena wants more out of life than she can expect if she follows the path her mother wants for her.

The stories she tells of her schooling, her friends, her struggles with boys and the adventures she has outside her mother’s reach paint a picture of a time and place that seem closer to the turn of the last century than the middle of the 20th century.

At school and at home Elena must constantly judge what behavior is acceptable and what will get her in trouble. When she is selected as a tour guide for foreign students and later as an office worker at the House of Friendship and Peace she is exposed to a world rarely experienced by her compatriots but the rules governing her behavior – can she accept a gift, is she allowed into a hotel or restaurant, how far can she accompany a foreigner – are only sometimes clear and her navigation of these rules is often so fraught that I don’t know how she does it so calmly. Her navigation of her relationships, with her family, friends, and men, is no less fraught and how she deals with everything in her life makes for compelling, sometimes heartbreaking, reading.

What I love so much about this book is how beautifully Elena writes.  Her sentences soar and she is so good at immersing you in the story that you are with her in her classroom with the wretched teacher Nina Sergeevna; her mother’s lab where her Aunt Klava “rasps tobacco-smelling words into her ears”; and on the streets of Leningrad as tour guide for Kevin and other clueless British tourists who are shown a Russia that does not exist for her fellow citizens. Reading where she comes from and where she wants to be you completely understand the decision she makes, echoing her mother’s rash choice of years earlier, to marry a near stranger and escape.

This book only covers the first twenty three years of Elena’s life till the moment she is free. She has finally written the story of what happened next, Russian Tattoo, which is being published in January and I can’t wait to find out how her life has turned out.

A Mountain of Crumbs: A Memoir
by Elena Gorokhova 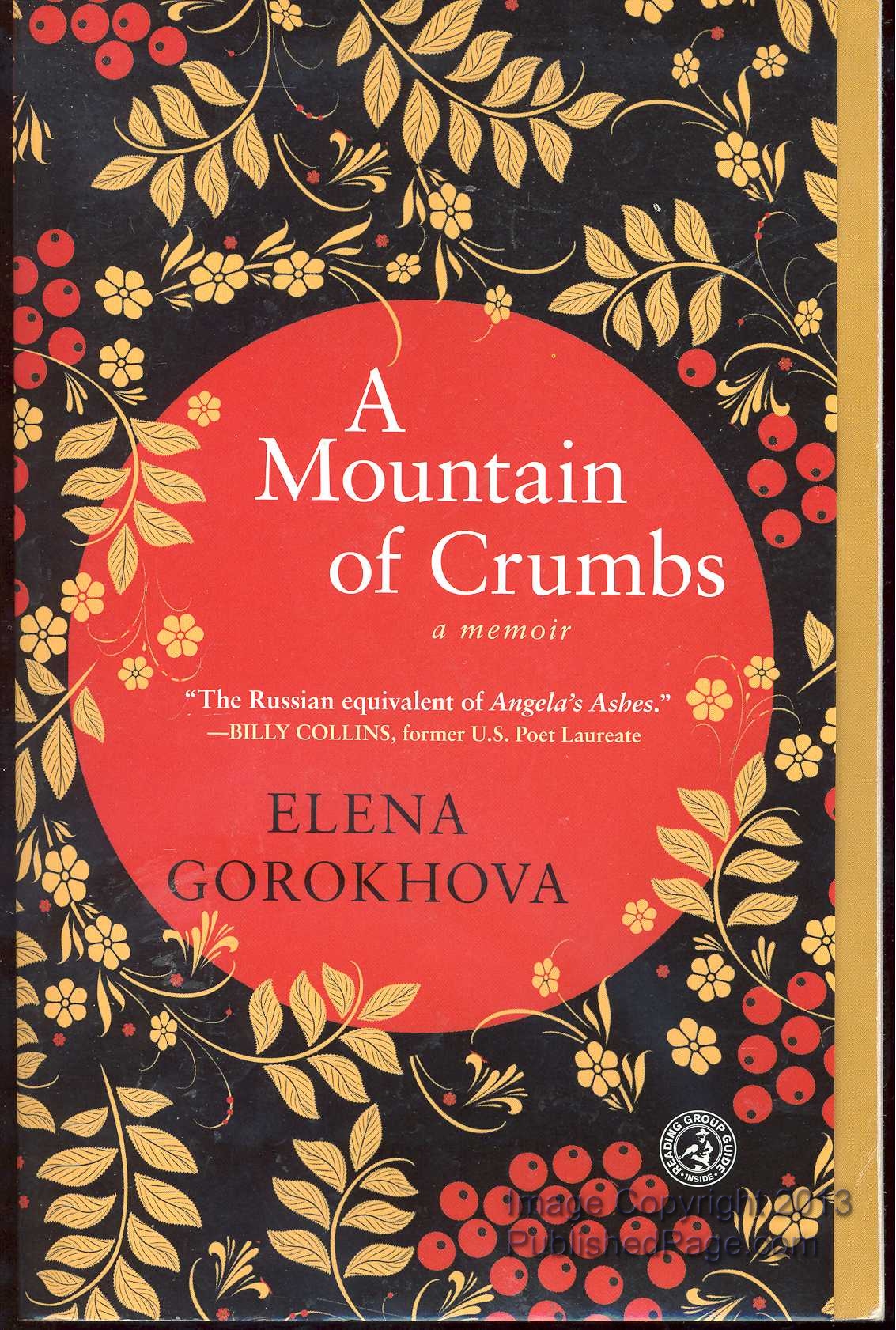 |+| Add to Your Shelf
A Mountain of Crumbs: A Memoir
Elena Gorokhova