The Distance Between Us is Reyna Grande’s tremendous memoir about growing up in Mexico as a child of poor parents living in el otro lada—the other side—a term used to refer to the United States. When Reyna and her siblings get the chance to live in America, they realize that its appealing power to rid them of the poverty caked on them like dust comes with sacrifice and great changes.

The beauty of The Distance Between Us is that Grande’s tale offers no easy narratives or solutions. Her parents display an uncanny wisdom and almost selfless clarity, as when her father first leaves his family (Reyna, her mother, and two siblings) to work in the United States, earning money to buy land in Mexico and build a family home (often the only irrefutable indication that one not only belongs to a place but is tied in a permanent way to that place). Similarly, when Reyna is born, her mother asks the midwife to bury her umbilical cord in their compound so that they will always be connected and Reyna will always remember where she came from. This visceral expression of familial intimacy resonates powerfully within the reader, and the good intentions of Reyna’s parents form the framework of her memoir.

However, the framework remains just that: a flimsy outline of good intentions and little fulfillment. An unfinished house. Her father is an alcoholic whose violence sways precariously over his children, descending at random. Her motherleaves the children in care of their aging grandmother to join herhusband in the States, returning toMexico—a new baby in tow—after he moves in with another woman. In an effort to escape the overwhelming povertyshe also takes off with a new boyfriend, returning only when he dies. It’s impossible to overlook the indomitable will of Reyna and her siblings as they struggle to love parents who disappoint constantly, to accept them for the sacrifices they have made on their behalf, including her father illegally smuggling them into the States despite getting arrested twice on the way.

The Distance Between Us is an important and deeply personal perspective amid the intensifying arguments about illegal immigration in the United States, but more importantly it’s a story about family and sacrifice, about good intentions and the immigrant struggle to achieve whatever is possible in America. Reyna’s mother need not have worried: Reyna’s background molds her even in America, regardless of the buried cord, and eventually lends her the strength to develop her own voice and determine what she will be.

The Distance Between Us
by Reyna Grande 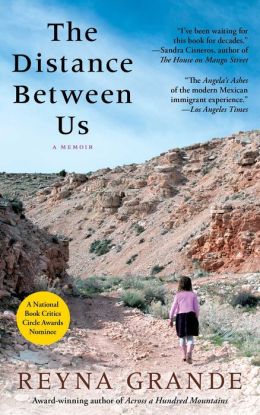 |+| Add to Your Shelf
The Distance Between Us
Reyna Grande

Funny, heartbreaking, and lyrical, The Distance Between Us poignantly captures the confusion and contradictions of childhood, reminding us that the joys and sorrows we experience are imprinted on the heart forever, calling out to us of those places we first called home.